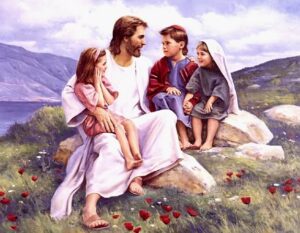 My dear friends neighbors and fellow thinkers and readers, I bid and ask you to join with me in another adventure of intellectual discovery where those who may wish to engage in critical thinking and do not engage in and accept media lies, falsehoods and political code words and hype can join in the effort to gain truth and facts amid the barrage of corruption and virtual darkness we are confronted with and befuddled and made effective fools of. I welcome you in this quest and task of attaining and coming to know and grasp intellectual honesty and honesty discernment. Join with me in this voyage of discovery to get at what is valid and authentic in this world of confusion and do come with me in tearing apart the curtain of lies and darkness that hides from us what is truth and facts.

Today. dear fellow thinkers and readers and Christians and non-Christians alike, I now seek to interpret, understand, explain, and analyze the sayings of Jesus found in Matt18:1-6. These verses are as follows: “At that time the disciples came to Jesus saying, ‘Who is the greatest in the kingdom of heaven?’ And calling to him a child he put him in the midst of them and said ‘Truly I say to you unless you turn and become like children you will never enter the kingdom of heaven. Whoever humbles himself like this child, he is the greatest in the kingdom of heaven. Whoever receives one such in my name receives me, but whoever causes one of these little ones who believe in me to sin it would be better for him to have a great millstone round his neck and to be drowned in the depths of the sea.’”

What are we to make of this saying of the son of god and the savior and redeemer of the world? He tells us the nature of true greatness is to be humble as a child who is humble in his dependency and he says in becoming and being humble like children, we turn away from childish self-interest and self-chosen goals and behavior and so turn as the humble child to god with childlike relations to a parent, not childish behavior. He says to his disciples when they become humble like children then those will be the greatest in god’s eyes in the kingdom of heaven. Jesus informs us here that it is humility and in our being like a child that that person will be the greatest in the kingdom of heaven. The disciples here may refer to the entire church community or to the church leaders. Perhaps being like a child means there is no hierarchy in the church. All are on the same level when it comes to the gospel and forgiveness and all are to be humble as children. The child here stands for humility as a symbol. Jesus tells following his statement and direction to be as a humble child and that this self-regulation and self-imposed limit is a check and way to avoid the temptation of arrogance.

Finally, in verse 6, Jesus warns against causing the humble in the form of a child to sin with the terrible consequences of a millstone around the neck or drowning in the depths of the sea. The point here is the importance of humility and that is where true greatness lies and the humble will enter the kingdom of heaven The passage is not to be taken literally to mean that only children will be saved. The emphasis is on the necessity of humility and in that quality true greatness lies. There does seem to be a literal statement that whoever receives the child receives him and should you cause the child to sin there may be dire consequences. The proper interpretation might mean that he who receives the humble receives him and he who causes the humble and innocent to sin will have serious consequences.

Note: I am indebted to the commentary on these passages found in the New Jerome Biblical Commentary.