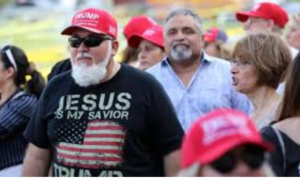 A Comment on an Academia Article, ‘Make America Christian Again: Christian Nationalism and Voting for Donald Trump in the 2016 Presidential Election,’” by Andrew J. Schatkin

My dear readers, thinkers and you who wish to critically think, I bid and ask you to join with me in another adventure of intellectual discovery where those who may engage in critical thinking and do not engage in and accept media lies, falsehoods and political code words and hype can join in the effort to gain truth and facts amid the barrage of corruption and virtual darkness we are confronted with and befuddled and made effective fools of. I welcome you in this quest and task of attaining and coming to know and grasp intellectual honesty and honest discernment. Join with me in this voyage of discovery to get at and find what is valid and authentic in this world of confusion and do come with me in tearing apart the curtain of lies and darkness that hides from us what is truth and facts.

The other day, I came across an abstract for an article entitled: “Make America Christian Again: Christian Nationalism and Voting for Donald Trump in the 2016 Presidential Election,” by Andrew Whitehead, Samuel Perry, and Joseph Baker. I read the abstract and found its contents somewhat shocking and disturbing. The authors sought to give reasons for Americans for voting for Donald Trump in the last election. The authors, or rather social scientists, have proposed a number of explanations including: economic dissatisfaction; sexism, racism, Islamophobia; xenophobia; and anti-immigrant feelings. The authors seem to say, however, the main factor was Christian nationalism. I make this comment: Over sixty million voters voted for Mr. Trump and the authors do not even consider that they may have felt him qualified for that office as the owner of a billion dollar business in the most diverse city in the world with a vast variety of employees of all races and backgrounds. The authors cite sexism when many millions of women no doubt voted for the President and I myself know of many women who voted for Donald Trump and will do so again. Two of my women family members have PhDs and voted and will vote for the President. The authors cite sexism when the Presidents pro-life position will preserve the lives of many female babies who will not be aborted. The authors say Donald Trump is anti-black when I know of many of our black neighbors American, Caribbean and African are fervent backers of the President. Moreover, the idea of this billionaire NY businessman being anti-black is ludicrous if not ridiculous. He is said to be anti- Muslim when the authors know very well the attacks that had occurred coming from some Muslim societies that compelled the President to enact the travel ban done to preserve American lives that had been lost and were in danger of being lost. He is not anti-refugee but he realizes that refugees must be carefully vetted before being admitted to this country. Finally, the president is not anti-immigrant but opposes illegal entrance into this country; in short he is not anti-immigrant but correctly has determined that since there are legal avenues to come here, illegals cannot be tolerated and should be deported. There is no reasonable basis for so called Christian nationalism to be a factor when along with the other conclusions if not slanders are stated and alleged without factual basis. The beginning and end point of this abstract and summary I speak of is not to by proper research find true and valid reasons for voting for Donald Trump but to shout slander and political slogans, which only serve to hide any truth on these issues that is not only ignored but not even considered. The article finds only bad and hostile reasons for these voters voting as they did; moreover, the authors so-called reasons for voting for the President are statements, without factual foundation reflecting the authors prejudice and biases. The only way these so-called reasons for voting for Donald Trump can be found is to get into the minds of these voters, number one, also hoping the voters will say what the authors say to be so about the reasons for voting for the President, an altogether tricky if no impossible task.