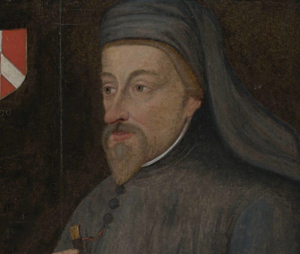 “A Biographical Sketch of a Leading English Poet of the Middle Ages, Geoffrey Chaucer,” by Andrew J. Schatkin

My dear fellow thinkers and readers and lovers of English and other great literature, I ask you to join with me in another adventure of intellectual discovery where those who may wish to engage in critical thinking and do not engage in and accept media lies falsehoods and political code words and hype can join in the effort to gain truth and facts amid the barrage of corruption and virtual darkness we are confronted with and befuddled and made effective fools of. I welcome you in this request and task of attaining and coming to know and grasp intellectual honesty and honest discernment Join with me in this voyage of discovery to get at and find what is valid and authentic in this world of confusion and do come with me in tearing apart he curtain of lies and darkness that hides from us what is truth and facts.

I wish to speak of today one of the very greatest and most enduring of English poets one I have always loved almost as much as the haunting verses of Vergil and the majesty of John Milton; I mean Chaucer. I have spoken of in these pages of the great lights of English literature such as EM Forster, Jane Austen, Charles Dickens, Thackeray, Jane Austen, and John Stuart Mill. I treasure and love them all and they are, like Alexander Pope, my intellectual and literary indispensables, along with what Mortimer Adler said of the bible to be the foundation of western thought and culture in his great book entitled How to Read a Book, which I advise you all to read.

Chaucer was born in 1340 and died in 1400 and is considered the greatest English poet of the middle ages. He is best known for his Canterbury Tales. Among Chaucer’s other works are the Book of the Duchess; the House of Fame; the Legend of Good Women; and Troilus and Creseyde.

Chaucer was born in London and his father and grandfather were London vintners. Chaucer’s life is fairly well documented as a public servant. Chaucer came into the court circle and worked as a courtier, diplomat, and a civil servant, and worked for the king from 1389 to 1391 as the clerk of the king’s Works. Chaucer served in the army in the Hundred Years War. He travelled a great deal and married in 1366 and studied law and became a member of the royal court of Edward the III. In short, Chaucer had a most varied public career which I have only shortly touched upon. Chaucer died in 1400. Chaucer became a close friend of John of Gaunt, the wealthy Duke of Lancaster and father of Henry the IV and served under Lancaster’s patronage.

I am most interested in Chaucer’s work and life of a poet and not so much his public and civil and governmental and political career, although I have touched here upon that part of his life.
The Book of the Duchess speaks of John of Gaunt’s first wife. and is in the form of an allegory. This was his first major work. Two early works were Anelida and Arcite and the House of Fame. Many of his major works were written when he held the job of customs comptroller for London from 1374 to 1386 and his Parliament of Fowles and The Legend of Good Women and Troilus and Criseyde date from this period. Chaucer translated Boethius, the Consolation of Philosophy, and the Romance of the Rose. Chaucer is known for his metrical innovation having invented rhyme royal.

The poetry of Chaucer helped standardize the English, although Middle English is somewhat removed from modern english. Chaucer’s most famous and enduring poem is the Canterbury Tales, which feature pilgrims of varied occupations and backgrounds who speak of and relates and give the story on their pilgrimage to Canterbury and include among others the knight and the miller and the friar. All are most colorful characters and present a picture and portrait of the world of the middle ages that we cannot easily forget. Chaucer was truly the founding father and founder of the English literary tradition and in many was his poetry is now confined and known only in academic English departments. I had the chance to read him in college and have never forgotten the literary experience in being exposed to this very great poet and writer. I wish I could read him more, but the distance of his language makes this most difficult. I urge you all to make the attempt to read him and come to know him and his world and his great poetry. Greatness has no limits and we cannot ignore him and discard him because his time is past. We stand on the shoulders of the greats of the past that we cannot afford to not know at our peril. Communism has its origin in Plato, as does the full equality of women, and if you will feminism.

Note: I owe the content of this essay to the biography in Wikipedia.