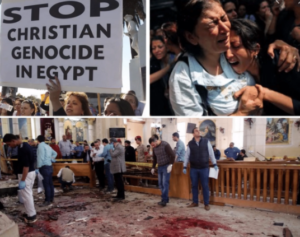 “More Comments on the Worldwide Persecution of Christians,” by Andrew J. Schatkin

Dear Friends and fellow discerners and thinkers, those of you who wish to proceed on truth and facts however distasteful of many elements of our system and society I have spoken previously about the worldwide persecution of Christians, a topic the mainstream media declines to address or even speak of for reasons unknown despite their readiness to speak of black lives matter which of course as a Christian I deeply agree with. I not only say all lives matter, regardless of race or sex or national origin, but all lives for Jesus have an eternal value that did not stop at death and suffering on the cross. It does seem as the mainstream media and the academic sector decline to speak of or address these murders, rapes and torture and arrests, which have been going on and occurring for many years and Christian worldwide continue to be persecuted, whether in Nigeria where hundreds have been murdered and tortured and raped; and also in China where pastors are jailed; in Pakistan where blasphemy laws are enforced against those who speak against Mohammed and can result of their incarceration and execution; and Egypt where the Coptic Church is regularly subject to persecution. The list is endless, yet the media in this country and other countries continue to gloss over these events and so to speak walk over the burned and mutilated bodies of our Christian brothers and sisters.

I now wish to update these ongoing persecutions and events. In California, the state has banned hymn singing in church services, a clear attack on religious liberty and the matter of being before the courts; in Chile, several pastors have been arrested, one in June, using Covid as an excuse to ban religious activities. The matter of this pastor was reversed the high court and several other pastors were arrested in worship and the matter was reversed by the high court. These are similar and clear instances of ongoing acts of persecution and bias against the church which was reversed.

The situation in Iran is even more critical. A Christian convert Behnam was arrested with two others, Mahdi and Babak, in house churches. Several other Christians had been arrested in the last nine weeks, and seven of the nine men were released on bail. These men were all members of the church of Iran and the Pastor Yousefis is in prison for a 5-year sentence while pastors Matthias and Shabooz remained in custody. The converts lost the appeal of their five-year sentences. Four were transferred to prison and the judge rejected their attorney and at the preliminary hearing nine were accused of acts against national security and promoting Zionism. Pastor Yousefis is in prison serving a ten-year sentence.

For Christians in many countries and societies, the situation remains critical. Ladies and gentlemen, join me in prayers for our persecuted Christian brothers and sisters which our world chooses to ignore.