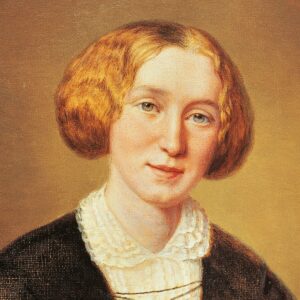 “A Short Biographical Sketch of One of our Greatest English Novelists and Writers, George Eliot,” by Andrew J. Schatkin

Ladies and gentlemen, and my dear readers and thinkers and you who choose to discern and use your critical faculties of thought and reject political code words, political hype, and media lies and falsehoods, whose object is to corrupt and fool us all you worthy citizens. I ask and bid you join me in another voyage of intellectual discovery where the curtain of darkness put upon us all by the false forces of commerce and politics can be rent and torn apart and we can be enabled to see the true light of the forces of truth and intellectual honesty. I ask you to come with me in a quest to find the truth and facts in a barrage of corruption and lies seeking to bring destruction to us all.

Ladies and gentlemen, today I will present a short biographical sketch of one the great English writers and thinkers of all time, George Eliot. I have always had a great love and passion for the great English writers of the past and they continue to be my idols and guides for my life whether Chaucer; Alexander Pope, Dryden, Spenser, or many others, countless in number and greatness. I have on these pages written of some of my favorites and indispensables including, Dickens, EM Forster, Jane Austen, John Stuart Mill, Anthony Trollope, and Sir Walter Scott. These are the great writers of all time that have created and moved our civilization forward to where it is today.

I now present a thumbnail sketch of one of the greatest of our writers and thinkers, as I said before, George Eliot George. Eliot was born in 1819 and died in 1880. Her actual name was Mary Anne Evans but was and became known by pen name George Eliot. She was a novelist, poet, journalist, and translator and was one of the leading writers of the Victorian era and wrote seven wonderful and insightful novels including Adam Bede; The Mill on the Floss; Silas Marner; Romola; Felix Holt the Radical; Middlemarch; and Daniel Deronda. Most of these novels are set in rural and provincial England. I can only say and say again that I regard Middlemarch as one of the greatest of English novels and it has been described as such by many including the novelist Martin Amis. She was born in Nuneaton in Warwickshire, England and received for a woman in those days a fairly good education. She was brought up in a religious background and when she 21 she moved to Coventry and was exposed to more liberal radical religious views. After a brief move to Switzerland she moved to and London and became the assistant editor of the left-wing Westminster Review. She lived together with the philosopher and critic George Lewes, already married in a so to speak open marriage. Her first book was Scenes of Clerical Life. She married John Cross in 1880. She did a great deal of work as a translator from German and as a reviewer and essayist.

She began her main body of work with her recollections of rural English society in Adam Bede and the Mill on the Floss. I read Silas Marner in high school as an assigned text and later had the mind-boggling experience of reading Middlemarch which in presentation, thinking and psychological insight changed my life. Eliot is and always will be one of the greats and her position in English literature is most secure and despite our current modern fads of only the recent and current having any value; despite our society based on politics and political correctness the truth of her greatness cannot be dismantled and taken away. She will always be on the greats and her position cannot be taken away nor should it be taken from our children and the coming generations.

I urge you and, in particular, your children, whether in college or high school, to read this great writer and author’s literary output. Urge your children and whoever of your neighbors may know and encounter to drop their cell phones, cease staring at their computers, and get a library card, and read these great and lasting works both of fiction and her essays and reviews.

Note: Much of the information in this essay can be found on Wikipedia.