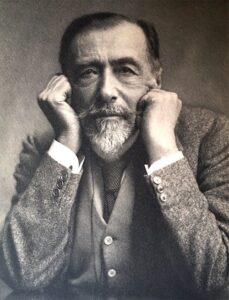 “A Short Bio of One of the Greatest of English Writers, Joseph Conrad,” by Andrew J. Schatkin

My dear ladies and gentlemen, I bid and ask you to join with me in another adventure of intellectual discovery where those who may wish to engage in critical thinking and do not engage in and accept media lies, falsehoods and political code words and hype can join in the effort to gain truth and facts amid the barrage of corruption and virtual darkness we are confronted with and befuddled and made effective fools of. I welcome you in this quest and task of attaining and coming to know and grasp intellectual honesty and honest discernment. Join with me in this voyage of discovery to get at and find what is valid and authentic in this world of confusion and do come with me in tearing apart the curtain of lies and darkness that hides from us what is truth and facts.

My dear friends and fellow thinkers and readers, today I will speak once again of one of the giants of English literature, Joseph Conrad. From my earliest youth, he has been one of my favorites and literary heroes. I take it as a privilege and honor to speak of him and his great and outstanding literary work that will always be forever a monument to his mind and his thinking. Joseph Conrad was born in 1857 and died in 1924 and was a Polish-British writer and is regarded as one of the greatest novelists to write in the English language. He did not speak English until his twenties and wrote short stories and novels many with a nautical setting. Conrad drew upon his experience in the French and British merchant navies. His early years were spent in Poland and at the age of sixteen he was sent to Marseilles, France for a career in the French merchant marines In 1878, he joined the British merchant marines. He worked on ships for ten years. Many of his novels and short stories are drawn from his sea faring career including his first novel Almayer’s Folly; The Shadow Line; Typhoon; Youth; The Nigger of the Narcissus; and Lord Him. In 1890, Conrad returned to Poland and left for Africa in December of 1890. One of Conrad’s greatest works came from his experience in Africa the heart of darkness a story of great psychological depth cloaked in a tale of savagery and brutality. In March of 1878, he attempted suicide. In 1896, Conrad married an English woman named Jessie George and in 1914 took a vacation with his wife and sons in Poland. Other outstanding works included The Secret Sharer; The Mirror of the Sea; and perhaps his greatest works, Nostromo and Under Western Eyes. His prose style was akin to poetry.

For me, a lover of English literature, he is one of my idols and one who when I read him inspires me with his psychological depth and his prose style almost poetic in form and presentation. His depth in his work is very great and he is a opponent of our age of the surface, the quick, and the facile. He demands much from his readers but the challenge and effort is well worth the readers’ attention. He is a symbolist and will always be one of the greats of English literature well worth the effort in reading and understanding. His depth is very great and his writing calls upon all our emotional and spiritual faculties and of course intellectual faculties to reach the level of his mind. It is a privilege to read him and I urge the younger generation to read his books and spend less time with cell phones and emails and I ask you dear parents, direct your children to these very great writers I have spoken of in past essays. Do not let your children be cheated in not reading who I most recently wrote about, George Eliot. Do not let these writers pass your children.

Note: I acknowledge much of the information in this essay comes from the Wikipedia article on this author.