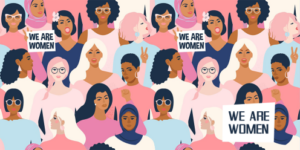 “A Few More Words about Feminism,” by Andrew J. Schatkin

My dear friends and you who wish to engage in clear critical thinking and reject media falsehoods, media lies and all forms of political hype and political code words, I bid and ask you to join with me in another intellectual journey where we can seek and gain some truth and facts together and tear apart the curtain of darkness and corruption that surrounds us and beset and fool us.

Let us reason together with the use of our critical faculties to oppose the lying destructive political and commercial forces that have no intellectual value other than for these forces to gain power and money over and from us.

Ladies and gentlemen, I would like to say a few words about feminism. In fact, I have in two of my books given some thought and analysis to the feminism movement. In my book Essays on the Christian Worldview and Others, Political, Literary and Philosophical published by Hamilton Books, I analyzed and critiqued the feminist movement on pp 77 and 78. Again, in my further book entitled Essays on Faith, Culture, Politics and Philosophy, in chapters 45 and 54, I offered a similar analysis and gave my thoughts about feminism and the feminist movement. The book was published by UPA. In these books I noted and I stand by this analysis that women were historically treated with underclass status in the west and were largely for some time confined to the home and family and not given opportunities for employment for the full use of their talents and that situation was rightly corrected and the society for its benefit now has the full use of the talents of half the human race. I also said that one or two effects of the feminist movement was the loss of the concept of romantic love, a factor in western culture for some 1,500 years, and, moreover feminism also had the effect of ignoring and not respecting the great contribution of women and wives and mothers in the home front and family. Finally, I noted that some women in this movement have adopted a somewhat sharp edged masculine personal presentation.

I add this that feminism, I think, involves a lack of respect for women and the female role as mothers and home creators and maintainers. In the past, women who were mothers were accorded great respect. In some sense, feminism has its roots in a gross lack of respect for women and the role of women in the world and their great role in society as mothers and homemakers which has been for some time subtly denigrated and pulled down, forcing women to compete and function in the world in the male image and in some sense imitating and undertaking the male role of the tough aggressor and provider. The woman of today has become an object of pleasure and the true beauty and mystery of womanhood has been crushed and lost. One would hope that the spiritual beauty and the great genius off women will be rediscovered and reborn, where the women’s role in the family life will be found and valued again as will her role in the world and her true role in the culture of bringing love and mediating love in the world and our culture.

Ladies and gentlemen, I hope you have found value in this little essay as much I have enjoyed writing it and I acknowledge the great book by Pope John Paul II, Crossing the Threshold of Hope (Knopf 1995), which provided me many of the thoughts in this essay.