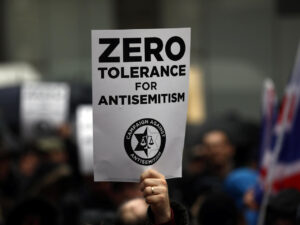 “A Few Comments on the Resurgence of Anti-Semitism, Islam, and Free Speech,” by Andrew J. Schatkin

My dear friends thinkers and you who wish to proceed in the route of critical thought and reject political code words, media false hoods and wish to join me in another intellectual adventure whereby we may attain to some sort of truth by means of honest discernment and find in the midst of the corruption and lies and darkness that surrounds us all some hints of facts and I bid you join with me in this truth and fact quest laying aside the curtain that hides the reality and actuality of what is occurring.

I wish to speak of two matters, first that of the presence and resurgence of antisemitism and how our Muslim brothers and sisters may reconcile American free speech rights with the blasphemy component of Islamic law. Antisemitism has had a long history and has been present in some form for almost 5,000 years of Jewish history. As a Christian I, detest and abhor any form of prejudice, hostility, and hatred. The history of the Jews is the cradle of Christian belief and Jesus and the disciples were Jewish as was St. Paul. God established in Genesis chapter 12 a covenant with the Jewish nation through Abraham which has lasted to this day. Israel, since its founding, has been under military attack and subject to constant attacks of terrorism by its Arab neighbors.

I now wish to take a closer look at more recent evidence or antisemitism in the world system. The Palestinian Authority has weaponized the UN and ICC, the United Nations and the International Criminal Court and the UN has established a 65 million dollar slush fund to wage war against Israel. The ICC prosecutor has demanded authority to investigate Israel for crimes against humanity for defending Israel. Palestinian terrorists have lobbed deadly rockets into Israel endangering innocent civilians and children. Finally, Mahmoud Abbas the PA president, has threatened that millions of fighters shall attack Jerusalem and Israeli settlements will be destroyed. These are some current examples of the resurgence of antisemitism and I say the forces of evil wish to demolish the state of Israel and more important wish to end and destroy the covenant of god with the Jewish nation and the holocaust did not succeed nor have or will current efforts to do the same succeed. God will not go back on his everlasting and eternal covenant with Abraham which will endure and never end. The forces of evil and Satan cannot and will not succeed as they have tried to do so to this day and moment.

I now wish to talk about an abstract I found and discovered by Angela Ewing on Academia.edu. Many of my essays are available on the Academia site and while going to the site I found this short what appears to be some sort of abstract or summary on the subject of the reconciliation of Islamic blasphemy law with American free speech rights. Ms. Ewing says in the summary that data was collected from ten Muslim imams, scholars, and community leaders in Virginia regarding blasphemy laws and American free speech and the results were that some would allow certain blasphemy restrictions and others opposed any punishment. I am shocked by these findings. Muslims come from a society where only Islam is allowed and any criticism is punishable by death. That Muslims should wish this to continue is a shock to my constitution. Any person who takes that position as to their religion of any kind is pushing the envelope and to take this position is a moral outrage. Islam, where in its own societies where it has majority statue or in the secular west where there is freedom religion, has no business even suggesting some sort of punishment for violation of blasphemy laws and if our Muslim brothers and sisters wish this to continue then they have in my view no right to even suggest and think this in a free democratic society and to do so is unthinkable and not open to discussion.