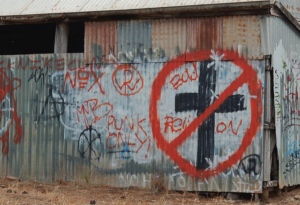 “Is There an Unspoken Rule against Publicly Saying the Name of Jesus Christ and, If So, Why” by Andrew J. Schatkin

My dear ladies and gentlemen, my fellow thinkers, readers and those who wish to proceed in the way of the process of critical thought and reject political correctness, political slogans and media propaganda, I bid you join me in another intellectual adventure seeking to discover truth and facts amid the barrage of darkness we are confronted with made to mislead and fool us. I ask you to join me in a journey of political incorrectness and
honest discernment.

The other day I had a conversation with a pastor I know and am friends with in which he agreed that in our present society there is an unspoken rule against publicly saying and articulating the name of Jesus Christ. He noted, and he was from Texas, that our dear Muslim brothers and sisters are given room in schools to recite their prayers. Mind you, I have nothing but love and charity for our fellow Muslim citizens, who are given and allowed to pray as they wish in a country and society where freedom of religion is an integral part of our constitutional and legal system. I agree with this pastor that our society finds the public recitation of the name of Jesus something of a scandal. I ask why and I would like to offer some thoughts and responses and answers with respect to this issue.

First, I take that many countries and societies in the world have something of a problem with Jesus. These include Saudi Arabia, where no church is allowed and no bible allowed to be distributed; Afghanistan; and Pakistan, where there are blasphemy laws jailing and even executing those who convert from Islam to Christianity; Nigeria, where books are labeled haram and the people regularly attack Christian believers; the persecution of the Coptic church in Nigeria; and, of course, the current persecution of Christians in China, where pastors are regularly jailed and churches and crosses torn down. It is clear and obvious that many societies fear and hate Christ and his church, including North Korea. I think the reason is that Christianity and Jesus’s message of love and freedom for the poor and underclass represents an intellectual and practical threat to those systems. Or, better put, one only fears and persecutes what is true, and Christ and the biblical revelation about him represents freedom and valuation for those imprisoned in those societies based on slavery and human devaluation. Christ and his church represent valuation and freedom for all, in particular, the poor and underclass, a challenge to systems ruled and imposed by force.

Why, then, in this country is the rule about Jesus and speaking his name publicly? His name is a threat and spells fear for those who hear and oppose its presence. He is the truth and it is only the truth, not lies, that create fear and distaste. These are the reasons for the present widespread persecution of the church and Christ. His message of value and regard for all spells the end of the powers of darkness that wish to dominate and indoctrinate. He is freedom and truth and will always be spurned and hated by many in the world who cannot and refuse to accept and abide by his message of spiritual and intellectual freedom. He makes all of us free and so for many that freedom cannot be tolerated and so I ask our school systems, just as Muslims are permitted to have time and place to pray that schools, set aside the same time and place for Christian to pray as Jesus commands.
Whether you agree with this or not please feel free to comment a.schatkin48@gmail.com.