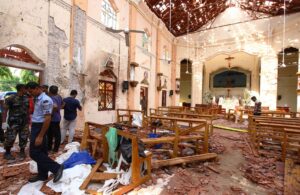 My dear ladies and gentlemen, Christians and non-Christians alike, I now present to you my prayer for this day, a prayer for our persecuted Christian brethren who have suffered and died in past persecutions and are presently enduring suffering and injury at the hands of their persecutors.

Lord Jesus, who despite a life of love, healing, and miracles, was persecuted and endured the agonizing death on the cross to rescue and redeem we sinful and lost humanity to bring us to the joy of heaven and eternal life. You know who were persecuted of the persecution of Christian believers in the Roman Empire in its first 400 years until the declaration of the Emperor Constantine of Christianity as the official state religion of the empire. You know the blindness of the persecutors and their fear of Christ as a threat to their power, and the suffering of Christians who refused to worship the emperor and suffered in many persecutions. The power of Satan blinded the empire until their eyes were lifted to see the truth and you rescued your people who suffered and had suffered greatly in these persecutions.

And now Christians are and have been persecuted in the Sudan, Nigeria, China, Egypt, Saudi Arabia and in the Middle East. Show your love and mercy for these persecuted innocents. Lift the blinded eyes of the persecutors and allow light and truth to enter that they may come to know your love and cease these acts of violence and evil. Jesus, as you look down from heaven with the holy trinity, father, son, and holy spirit, and with all the angels and archangels, bring the end of these persecutions by persons who hate and oppose Jesus and his love and mercy, convince the persecutors of their error and evil and forgive them as you have forgiven all humanity on the cross and will do so to the end of time.