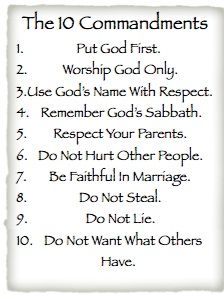 “A Comment on the Interpretation of the Ten Commandments and a Comment on an Abstract on Academia.edu by Andrew Whitehead,” by Andrew J. Schatkin

My dear fellow thinkers, and those who seek after truth and facts and reject political correctness as the source of their knowledge or political and media hype and wish to reject the shallow surface which our society recommends  and delve into depth and come or at least attempt to comprehend and grasp what leads to truth and who wish to engage in honest discernment and critical thinking:

I now propose first to speak of the commandments, not the entire Decalog, but commandments 1, 2, 5, and 10, the most intellectual, spiritual, and mental of the ten commandments. The ten commandments and Decalog are found in Exodus 20 verses 1-17. The ten commandments represent the most advanced ethical and moral thinking that can be found despite these commandments being handed down some 3,000 years ago or more. The first commandment forbids the worship of any other god but Jehovah or Yahweh. This commandment involved, commands, and advises quite clearly monotheism and that there is only one god or, better put, there is one god, the Hebrew god, and the command is a command to understand the one and only god as monotheism. The commandment not only commands monotheism, but that the only true god is Yahweh. This commandment by its actual statement and by implication not only instructs the Jewish nation to reject any other alleged gods, but forbids the polytheism which was quite prevalent in near eastern society at that time. It is noteworthy that the Hindu pantheon involves the worship of thousands of gods and it is the ancient polytheism spoken of and forbidden in this first commandment. In sum, much as the modern world has discomfort with the exclusivity of this commandment that there is one and only one god to worship and would wish to embrace the notion that all religions are the same and are equally valid, which is the common current propaganda, this commandment says and mandates and tells us otherwise.

Now let us take a look at the second commandment, which forbids the making and worship of a graven image or more exactly a carved image of wood or stone as representing the form and nature of god. The god of this commandment is a spiritual being and cannot be represented by anything material. The first commandment, which is a command and direction to one god, the god of Mount Sinai, commands no other gods but the one true god Yahweh. The second commandment is as equally advanced as the first commandment which commands monotheism. The second commandment is equally advanced in its concept of god as a spirit. The nations surrounding the Jewish nation embraced idolatry on a grand scale and were largely polytheistic in their structure and orientation. This commandment is most advanced in its thinking and thrust that god is and can only be a known as a spirit and is not and cannot be represented in a material form of wood or stone, and again there is only one true god who is and can only be known as a spirit. Again, the intellectual advance here is enormous and obvious.

The fifth commandment refers to the obligation due parents by their children. The operative word is to ‘honor.’ The commandment is not only addressed to young children honoring their parents, but to those of any age who have parents. In particular, this commandment refers to children caring for and respecting old and infirm and weak parents. Again, this is an extremely advanced ethic. The use of the word ‘honor’ is particularly important and compelling and involves a deep seated intellectual if not spiritual obligation on the part of children to their parents. So, again, the thinking is most advanced. To honor is in part at least an intellectual and spiritual request and command and, once more, the spiritual and mental advance is most great.

Finally, there is the tenth commandment, the most advanced and significant moral command which addresses thinking or a  thought pattern of envy and coveting which is a mental and spiritual weakness all if not most men and women share as a failing throughout most of their lives. This commandment is most unique as addressing itself with our innermost thoughts, desires, and weaknesses. The thought advance in this last commandment is substantial and profound. God tells us and speaks to us of our thoughts and emotions and tells us these improper and wrong thoughts of envy and coveting are so much of a sin and moral violation that they, despite their mental and spiritual character, are prohibited in these most important and significant of moral commands.

The Decalog was unique in the advanced thinking it represented in its time and remains so to this day. Jesus many times extended the meaning of these commandments, but in this essay, I will not touch upon that. What I have spoken of here and analyzed here represent my innermost thought on these commandments and most important on the extremely advanced  moral thinking reflected in these particular commandments: the command of the worship of one god, a spirit; to honor one’s parents; and not to covet. These commands concern themselves with the nature of god and spiritual commands and violations.

The next matter I will analyze and seek to understand and grasp is the abstract on Academia.edu by Andrew Whitehead in which the author under the title of “Gender Ideology and Religion: Does a Masculine Image of God Matter?” The author seeks to examine as set forth in the abstract whether a masculine image of good is significantly associated with a more conservative gender ideology.

Ladies and gentlemen, I offer the view that this abstract and book not only take a wrong approach to the issue and misunderstand the use of masculine imagery in the bible to represent god who has no sex but is spirit. As can be seen in my analysis of the second commandment of the Decalog, we are told in very definitive terms that god is a spirit. As such, we are informed god has no sex. What we must seek to understand is that there is a reason for the use of masculine imagery, at least in the Hebrew bible. God wishes us in the use of this imagery to avoid female sexuality and reproduction with our concept of god. The Near East was filled with sexually-depicted and charged goddesses and temple prostitution. So I think god wishes to inform us not to associate the god or his nature with female sexuality which was common at that time. It was believed that the harvest and food growth was associated with sex. Hence the use of male and masculine imagery with reference to the nature of god and his work and appearance. The use of this imagery is part of the biblical revelation handed down to us and cannot evaded or escaped much as some radical feminists would like. Thus, the conclusion in this abstract is erroneous. The masculine image is there for a real and compelling reason and must be accepted not for reason of tradition or conservatism, but because it is god’s revelation which is correctly believed and accepted, and accepted not because god is a man or appears masculine, but because god in his infinite wisdom wished us to veer from understanding god and his nature in female sexual reproductive terms.

I do hope my fellow readers and thinkers that this little article and essay will serve  to guide and enlighten you on what I have chosen to speak of here, commandments 1, 2, 5 and 10, and the matter of the masculine of god. I welcome any responses to this article to my email address, a.schatkin48@gmail.com.