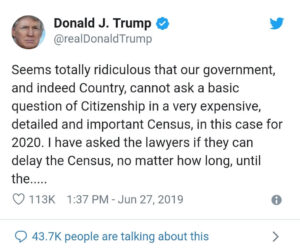 “The Question of Citizenship in the Census: An Analysis and Perspective,” by Andrew J. Schatkin

My dear readers, thinkers, intellectually honest, and politically incorrect. I want to examine the appropriateness or legality of a citizenship inquiry or question in the census. This question or inquiry or requirement was first proposed by President Trump. The President decided against pursuing the matter after the Chief Justice John Roberts joined with the Supreme Court’s four liberals to block the proposed citizenship question from the census. The Justice said the issue was not the question but commerce secretary’s Wilbur Ross’s having given a contrived explanation for why he was doing this rather than a genuine one. This was a victory for the Democrats. It was warned by so-called experts that the question could have resulted in a lower response among non citizens and Latinos The question was seen as a way to undercount heavily minority Latino states and favoring the Republicans in redistricting.

The census is supposed to count every person residing in the US, citizens and non-citizen, legal permanent residents, and the state results can determine how many seats each state gets in the House and for population-based federal funding formulas. Many versions of the census have included this question. The question was on the long form survey 1960 to 2000 and again the question was used by the American Community Survey in 2010. The left argued, as usual, the question was anti-immigration on the part of the President and the left argued the question would stoke fear among immigrants, mostly Latino, scaring them off with the result of an undercount and loss of seats for the Democrats.

Let me say, I am in no position to criticize the United States Supreme Court and I obey and respect its decisions completely and in their entirety. However, I question and find lacking strength the arguments raised concerning the question and its rejection by some in our system and in our society. Should non-citizens be counted or, better put, those who are illegally here and defying our system of law and overtly manipulating our system, be counted with our hard-working citizens who through their entire lives have obeyed and abided by the law? One who is illegally here has no status in our system until they correct their status and obtain citizenship. In the first place, they should have come here through the available legal avenues as, for hundreds of years, thousands have entered through the legal avenue and process on Ellis Island. Moreover, past censuses have included this question. It is clear by any chain of reasoning and logic that those who are here as law breakers and law violators have no place in being counted in the census which is supposed to count citizens and non-citizens, legal residents, not criminals who should not be here in the first place and should be subject to the forces of our legal system whatever they are. The bogus argument that the question would result in fear among unauthorized immigrants carries no weight when these so-called immigrants; if they were not in violation of the law would have no fear and nothing to be afraid of. Their fear is real since they know they are violating the law and they have no right to be here, and make use of our employment system, medical facilities, and educational system. Citizenship is a privilege and a right and those who make no effort to obey the law in this respect in my view deserve no consideration and should not be counted as a factor in forming our national government funding or seating in the House. The census is a legal process to count, as stated, citizens and non-citizens, not persons who have no legal place in our which is a system of law.
As a Christian, I have as much concern and love for humanity as any of us, but decline to exercise concern and love for one who signally lacks love or any sort of loyalty to our system and are fully out for themselves to the extent they can continue to get away with what they can.

I am indebted to much of the content in this essay to an article in Vox called “Trump’s Census Citizenship Question Fiasco Explained.”