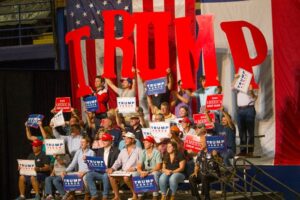 “The President’s Recent Executive Orders: An Analysis, A Response, and the Truth,” by Andrew J. Schatkin

Ever since he took office, President Trump has been the subject to constant and unremitting attacks by the left ideology and its proponents in an obvious attempt to get him out of office by constant attacks hoping he would resign or lose the election. His political enemies have proceeded with slander, calling the people who voted him rust belt and poorly educated southern whites. When this did not work, the attack focused on the accusation of his being a racist and being sexist and anti-woman based on his pro-life position and anti-black and anti-immigrant based on his enforcement of the immigration laws directed to the removal and deportation of persons illegally here and taking advantage of our medical, employment, and educational system through the cry of compassion and love and humanity. Violating the law results in no entitlement to be here and the presence of illegals takes jobs away from our poor black and Latin citizens who need those jobs and need help that the left maintains and demands illegals are entitled to.

I would l now like to talk about the President’s expansion of the travel ban to limit immigration from six new countries. The current travel ban from seven countries. The President was roundly criticized by the left and the democratic party as religious prejudice. The left in this criticism ignored the worldwide acts of terrorism which have been ongoing from a minority in some Muslim majority countries. Most of our Muslim brothers and sisters are law-abiding and hardworking citizens not involved in these acts of violence. Moreover, the President has the right to set and control immigration to this country as the Supreme Court held in a ruling on this matter. The new ban involves citizens from Nigeria, Eritrea, Myanmar, and Kyrgyzstan. In addition, citizens from Sudan and Tanzania will be ineligible for the diversity visa program. The left cries racism. The cry is false. As before, the President is and was concerned for national security in that the six countries do not adequately share information information with the U.S. and do not properly issue or track citizens identification documents such as passports. The left fails to acknowledge the proper steps the President is taking based on the reality that we do not know or lack sufficient vetting by these countries as to who these persons are or their background which could be anything. The President is the executive of a nation and we cannot admit without proper knowledge or investigation persons from third world countries and permit these individuals to float in and about our country without proper concern and knowledge as to who they actually are in background and in some factual detail.

Let me look at another initiative of President Trump. The president has suspended enrollment of New Yorkers and other programs that allow travelers to pass quickly through airport security and customs. New York passed the green light law last year that said a person over the age of 16 can apply for drivers licenses and learners permits regardless of their citizenship or current legal status. That law prevented customs and immigration from accessing information in the DMV’s database without a court order or judicial warrant The action of Governor Cuomo was a defiant outrage to all New Yorkers. He is saying that illegal and undocumented aliens will be given free access to our system to go as they please and wish. These persons are illegally here and we know nothing about what they are doing, what their background is, and what they are about and might do given the free rein afforded them. The issue is national security and safety of our law-obeying citizens and the President’s move in this respect prevents free entry and passage for persons who could easily pose an unknowing danger by easily going from state to state and country to country with unknown goals and intentions since we know next to nothing about who these persons.

I will now examine a third initiative of President Trump. This rule states that if consular officers have reason to believe a traveler seeking a tourist or business visa will give birth during her stay in the U.S., the officers will presume she is doing so for the purpose of obtaining U.S. citizenship for the child. The consular officers have been instructed not to ask every female whether she intends of give birth in the U.S., but if the applicant lists her purpose for travel as medical reasons she will be asked. Pregnancy tests wont be part of the vetting process. The left stated in the left-leaning Center for American Progress that the rule will make it far harder for women and especially women of color to come to the U.S. and the rule will put women’s lives at risk. But the rule is reasonable. Our country and our society cannot be fooled and manipulated to allow pregnant women to make use of our medical facilities to have their babies thereby gaining by this act of gross manipulation citizenship and medical care. I ask my left brothers and sisters that persons who want to bring their children to our society proceed through the legal process and not manipulate the system to gain their goal and object. The President’s policy and initiative guards the concept of citizenship and does not permit the abuse of what is a privilege and an honor and not to be gained by foolery arguing the left battle cry of compassion and love which have no place in what is nothing more than a system of law.

Finally, the president forbids sanctuary jurisdictions from receiving federal grants except those that are necessary for enforcement purposes. The left objects and says many large cities have chosen not to cooperate with federal authorities in enforcing immigration laws, stating they have no legal grounds to hold apprehended persons a limited period and because they depend on the cooperation of immigrant communities to protect and serve the public.

The left is unconvincing in its argument for sanctuary cities. Sanctuary cities protect and raise up what is nothing more than illegality and law violation. Sanctuary is nothing more as a concept protecting the innocent, not the guilty, and those in defiance of the law in sanctuary cities defy our system that is based on the rule of law. There is and was no justification for not cooperating with the obvious duty of the President and the federal government to enforce the law in this respect. The only result of sanctuary cities is legal chaos and taking jobs from our hard-working legal citizens, those poor and vulnerable who are in desperate need of those positions that sanctuary seek to preserve by reason of their cheaper wages and no benefits for those who have no right to be here at all and should be properly be subject to our legal processes.

Let me end this literary excursus with these comments. The root of the problem is faulty reasoning and an attempt not only fool and manipulate but mislead. Any one who, as may be termed correctly and commonly as undocumented, are a possible real danger to us all. When someone is undocumented and is permitted to remain without investigation and vetting and subject to proper legal action, that person is a danger to us all. We do not know their backgrounds; we do not know who they are and what they might do. President Trump is doing his job and fulfilling his obligation to our country and society. As for the left ideology who as a Christian I have nothing but love and care for, I say you have lost and are not only being rejected by many but no longer are seen as true and are no longer convincing. You are dying a slow intellectual and pragmatic death. I wish you well in facing the inevitable. The problem of the left ideology is that it is no longer seen as embracing or stating truth and has been revealed for what it is, solely confined to an every shrinking minority of academia, the media, and perhaps Hollywood.

Finally, I point out a disturbing but necessary fact. Ninety-two-year-old Maria Fuentes was murdered by one Reeza Khan, a twenty-one-year-old illegal immigrant not released, as was proper, to ICE’s custody. He had previously been arrested for domestic violence charges. ICE gave the New York authorities prior notice, but rather than honor this request, New York released Khan. Ms. Fuentes would be alive to this day had New York done its job.