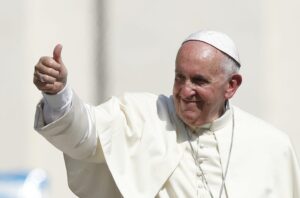 “A Response to and Comment on Pope Francis,” by Andrew J. Schatkin

I recently came across on my internet screen the response of Pope Francis to not allow married men to be ordained as priests and women to be ordained as deacons saying the Roman Catholic Church should find other ways to address what has been said to be a dire shortage of priests in South America’s Amazon region. I would like to comment and perhaps try to understand the Pope’s position on what would appear to be the women’s rights issue on this matter.

First, the church is not solely based on the democratic module of political equality. In short, the church is not a political or parliamentary institution based on our civil law system of full equality for all. That analytic of intellectual approach misunderstands the entire issue and matter. A Catholic priest is not a Protestant minister. A Protestant minister is the leader of a community of Christians. A priest in the stead and person of Christ is reenacting and in fact conducting the sacrifice on the cross that occurred 2,000 years ago. He stands in the person of Christ in this reenacted sacrifice. Jesus was born of a woman, had women followers, and women were at the empty tomb but Jesus lived his life to end of his ministry as a male and in the resurrection rose again with a male body or at least male body contiguous with his earthly body and reascended to heaven where he presently resides and lives in a spiritual male body. Thus there is a dogmatic and theological issue of whether a women standing in the person of Christ can conduct this sacrifice. The doctrine of the male priesthood is not a slap against women, or an attack of full equality of the sexes as stated in the first chapter of Genesis and restated by Saint Paul in Galatians where he says there is neither male nor female but all are one in Christ (Gal 3:28). This is in part the basis of the doctrine of the male priesthood. There are other reasons. Based on the biblical revelation in Matt 19:10, Jesus says, “there are eunuchs who have been so from birth; there are eunuchs who have been made so by men, and there are eunuchs who have made themselves eunuchs for the sake of the kingdom of heaven. He how is able to receive this let him receive it.” Clearly Jesus appears to say that celibacy is good for those who can live that life in full devotion and commitment to god and the kingdom of heaven. Again, in 1 Cor 7, Paul says he wishes that all were single and celibate as he is but each has his own special gift of god, one of one kind, and one of another. Paul and Jesus commend and advise if possible celibacy and the single estate. The biblical revelation thus is the basis in part for the unmarried priesthood in the Roman Catholic Church.

There is a third reason. In the near east, at the time of the patriarchs in the Hebrew bible, mother goddesses and temple prostitutes were common. These images of breasts and reproduction were rife in the ancient world. In his revelation to the Jewish nation and later in the birth and life of Christ, he steers us away from these images and seems to use male terminology to describe and allow us to understand the nature of god and not to connect god with reproduction and motherhood. Of course god has no sex and is a spirit. This male terminology is only by way of analogy and an image, nothing more. Nevertheless, there is good reason for it and I suggest this to be a third reason for an unmarried male priesthood, to avoid any sexual connection or reproductive con nection with the eternal god.

I now give you a fourth reason for the rule and position of the Roman Catholic Church in this respect. If Jesus as god had come to earth from heaven in the incarnation, if he had come as a woman in the society of that day in Palestine, he would have had no credibility and most likely could not walk about and be believed as a women if he had come as one.

And so I have given four bases for this doctrine that the Pope seems to be adhering to. Not all the answers, my dear readers and thinkers, are found in modernity and in current popular hype and politics. What is said from daily thought and talked about and perhaps believed often does not provide the truths we need to know. I ask you, gentle readers and friends, to consider what I have said here and give the matter some thought.