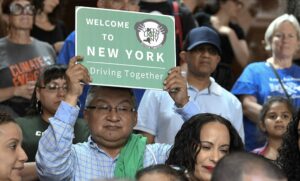 “Drivers Licenses for Illegal Immigrants: Is this Violation of Law a Good Thing?” by Andrew J. Schatkin

I would like to say a few words about the New York Law allowing drivers licenses for illegals or, in the fashion of left-wing ideology and political code language and political correctness, ‘undocumented immigrants.’ This so- called green light law allows persons without legal status or residence in the New York to apply for drivers licenses without a social security number and allows them to do so with a foreign passport. US District Court Judge Gary Sharpe dismissed a lawsuit filed by the Rensselaer County Clerk Frank Merola. Judge Sharpe stated Mr. Merola lacked standing, having failed to demonstrate an injury. Immigrant advocacy groups had pushed for the law saying it would improve driver safety and allow undocumented immigrants to participate in society.A legal challenge in a lawsuit brought by Erie County Clerk Michael Kearns was dismissed in similar fashion by US District Court Judge Elizabeth Wolford in Buffalo.

This law which has survived legal challenges in two federal court decisions is an outrage. Persons who are here illegally and are here in defiance of our legal system and taking and being given clear advantage to our medical system and employment system not only have no right to be here at all but certainly should not be issued and allowed the right to obtain drivers licenses which will likely be used to vote. What is occurring here is the concept of legal citizenship being eradicated if not eliminated and our hardworking legal citizens are being treated with disfavor and bias and truly deserve the best of treatment and not forced to compete with illegal immigrants and with law violators. Our federal judiciary and our state officials and governor are entitled to the greatest of respect. But I must part ways with the creation of a society and system endorsing law-breaking, law violation, and saying such law violators should be given favored treatment and help when they should be treated in accord with the rules and parameters of our legal system. In short, to abandon the applicability of our system of law and permit the manipulation of our system by these persons who are illegally here and set about to make fools of us all is an outrage and is intolerable and I ask our officials who take this view and position whether illegality should be allowed, excused, and encouraged.

Finally, I would like to comment on an article in the Bayside Times of Dec. 20-26, 2019 entitled, “Huge numbers of license-seekers file into DMV as Green Light Law is implemented.” The article spoke of assemblywoman Catalina Cruz, the first Dreamer to be elected to the state legislature, who stated she grew undocumented. Ms. Cruz stated that this law gave a chance to families who feared to go out while she said Washington sought to destroy them. Mr Valdes was quoted as saying that all New Yorkers will be able to apply for licenses regardless of their immigration status. This article and its so-called argument is bogus and false. Ms. Cruz who she admits and concedes she was illegally here and made no effort to change the situation, manages to obtain public office as a law violator and law breaker and then bemoans growing up undocumented acting and then demanding a kind of sympathy and and understanding for her acting in defiance of our system of the rule of law. She seeks to convince the weak-minded that she has the right to be here, even though she has managed to live and act in defiance of our laws. What defines Ms. Cruz is not the fear of growing up undocumented but her decision to remain so when she should and could have obtained legal status which is the right thing to do and which she should have done. Mr. Valdes made the rather absurd claim and statement that all New Yorkers will be able to apply for drivers licenses regardless of their immigration status. Mr. Valdes misuses and abuses the words immigrants and immigration. The issue is not immigrants and immigration but rather than illegal status; but I say that illegals are not worthy of not help or concern. Mr. Valdes confuses the word immigrant and immigrants with legality and the rights and privileges accorded and which should be accorded only to persons who have come here legally and not those illegal immigrants who have had every opportunity to proceed through legal avenues to citizenship and legal residence and failed to do so, or more likely refused to do so, preferring the easier route of illegal entry. Ms. Cruz and Mr. Valdes fool no one with false bogus argumentation, and decline to face the fact and reality of breaking the law and saying that action gives you and entitles you to sympathy, compassion, love and any rights and privileges at all which it does not.