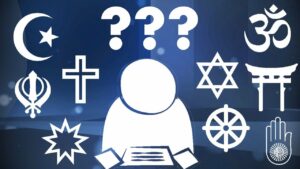 “Why I Believe Christianity to be the True Faith and Christ the True God,” by Andrew J. Schatkin

Friends, I would like to talk about why I firmly and without doubt believe Christianity to be the true faith and Christ the true God. In the first instance, in our modern politicized and politically correct, world it is taking a risk to make a claim of objective truth where we are surrounded by shouts and screams that everyone has right to their opinion; everybody is the same; all systems and religions are the same. Nevertheless, I take this risk. Let me make an initial comment of a most common falsehood and misconception, namely it doesn’t matter what you believe as long as you are sincere. This idea is patently absurd. Hitler and Stalin no doubt were sincere and caused the death and suffering to millions. People in the past believed sincerely that the sun went around the earth and again, although sincere in that belief, were terribly and absolutely wrong. I may believe a car exists to take me to California in 8 hours, and may believe this sincerely, but again would be wrong. Sincerity is nothing more than feelings and feelings are hardly a barometer for and to truth. People may say this with regard to religion to satisfy our desire and craving for political equality and political correctness, possibly to accept all views and so avoid possible friction. In short, sincerity is no guide to understanding of religious and philosophical claims.

Many in our modern world of murky unexamined thinking, where all opinions, however factually wrong, are to be respected, if not credited, say and maintain that all religions are the same. This is an obvious misstatement since Islam in the Koran tells its adherents to kill infidels; kill apostates; and oppress women as inferior. Hindus are polytheists and worship thousands of gods and goddesses; and Buddhists seek to leave if not reject the material world. Obviously, at least these religions are not the same as Christians who believe in a god of love, not oppression and violence; and, far from rejecting the material world, believe god created it, created men and women, and he himself came to the world as a human being; rose again with a full body; and says we will all rise again with our bodies. Not only are all religions not the same, but the adherents of those religions would be very surprised to be told that to be so.

I will now say why I believe Christianity to be the true faith and Jesus the true god. First, Jesus claimed to be god and divine and the only way to reach and know god. No other person has ever made this claim Neither Mohamed nor Buddha made anything approaching this statement. Second, Christianity affirms the material world. God created the entire world and universe and also men and women. He came as a man in human form; died as a man on the cross; and rose again in humanity; and he tells us he will return again in some sort of physical human form and that all humanity will also share in this resurrection with their earthly bodies, remade and reconstituted. No other religion accepts the material world and physical humanity as does Christianity. Third, no other religious teacher and leader has dealt with the issue of evil and wickedness as Jesus did. Christians believe in the reality of sin and evil. We are told there will be a judgment on human sin in all of us. We are told that Jesus came to rescue us from our sin and Jesus and Christianity acknowledge the reality of sin and evil as no other religion or person has ever done. As the secular world declines to address or deal with this issue, speaking of poverty and genetics as the reason for wickedness, not addressing the many genocides of the past century as the evidence of the grossest of sin and evil. Fourth, no other religious leader has claimed to have broken the barrier of death in rising from the dead and offering those of faith in him eternal life. Finally, Jesus claims to live within his followers as no other religious teacher has ever said or claimed. He promises to send the Holy Spirit to be with his followers.

This ends this essay on why I believe Christianity to be the true faith and Jesus the true god. I take this position by reason of these unique claims as well as the many profound ethical sayings of Christ to love our enemies; pray for those who persecute us; and that anger and lust are equivalent to murder and adultery. The nature and uniqueness of these claims in human history cannot be evaded or avoided. I take the intellectual position on these claims but ultimately he says come follow me. He says if you follow me you will have life; keep your life and you will lose out; lose your life and you will find your life; if anything is keeping you from me, throw it away; pull your eye out and cut your hand off for me; he says come to me and your sins will be wiped away; he says I am life and rebirth, come to me. What I had spoken of in intellectual terms here are better put and understood in what I have just said.

I owe a debt to the thoughts and ideas in this essay to the book by Michael Green entitled “But Don’t All Religions Lead to God” pub. by Baker Books, 2002, and to the book by C.S. Lewis entitled “God in the Dock,” pub. by Williams Eerdmans, 1970 p.160.