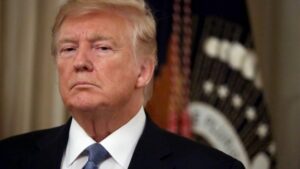 “Some More Responses to Comments and Slanders about President Trump,” by Andrew J. Schatkin

This essay, which could also be termed a blog, will consider some comments if not virtual slanders from the left perspective and ideology and its interpretation of the policies and legislation of President Trump. Prior to this essay, I placed before my readers two other similar essays one entitled “President Trump: is He Stupid or Not?” a response to some elements in our society holding that view. I also wrote, “Liberalism and the Liberal Ideology are Dead and Deceased and President Trump Signed the Death Warrant and Nailed the Coffin.”

I would now like to the comments and perhaps what could be termed slanders about the President. I take these comments from an extensive essay entitled Trump Administration Civil and Human Rights Rollbacks from the Leadership Conference on Civil and Human Rights. There is a reference to a budget blueprint in 2017 for the beginning construction of a wall on the Mexican border. This is interpreted here is a civil and human rights violation when the President is doing nothing more than securing the borders of this country from a massive influx of illegal aliens. A nation cannot be built and even allow the constant huge entrance of an illegal population a significant drain on our medical, employment, and educational resources for persons who not only have no right or basis to be here but are proceeding with the assistance of the left ideology manipulating their way into our society. The President was accused of a third version of a Muslim travel ban. First, many, if not most, Muslim countries were excluded including Egypt; Nigeria; Indonesia; and Malaysia. Second, the ban was not a Muslim religious ban but a reasonable response to a series of attacks on the part of the Muslim religious/political/and cultural elements in certain Muslim countries seeking the death and destruction of non-Muslims including Christians and Jews. This is an unfortunate fact and cannot be escaped by yelling and screaming “civil rights” and “racism.” The President is taken to task by this group for proposing the census question about citizenship. It cannot be more obvious of the validity if not necessity for this question since citizenship is the basis for the census count and illegal status is something the government must uncover and take appropriate legal action on. The President is seen as the agent of evil and sadism to allow states to seek waivers to require Medicaid recipients to work and he approved a waiver allowing Kentucky to required medical recipients to work. To define this in the terms that are suggested is a lie and a mistaken; when and if work is available and can be had, Medicaid should not be an excuse for not working. These are appropriate responses to an abuse of our social services system, which should place persons, if capable, in the work force. In short, Medicaid cannot and should not be an excuse for not working. The President was seen as a miscreant when the Department of Homeland Security and the Department of Justice announced an interim final rule to block people from claiming asylum if they enter the United States outside legal ports of entry. Asylum should be obtained on a legal basis and in accord with the law. The President correctly concluded that the claim of asylum after illegal entrance is bogus and a mask for remaining in the country and continue to remain on an illegal basis. There is a legal basis available to come to the United States and, having come here illegally, the claim of asylum was correctly interpreted by the administration as a way of maintaining illegal residence and, having come to the country illegally, the asylum claim must be viewed with scrutiny and suspicion and as possibly false. Also, it was reported that the Trump administration directed ICE to conduct a mass roundup of migrant families but it was delayed. The term “migrant” is obviously a mask and subterfuge for the reality is that these persons were not migrants but illegal immigrants who did not have a shadow of a right to be at all and the President’s action in this respect was entirely appropriate. It is noted and criticized that ICE raided 7 food processing plants in Mississippi and arrested 680 undocumented immigrants. The term “undocumented” does not define the status of these immigrants; the correct and accurate term is “illegal.” The raids were termed as a dangerous anti-immigrant agenda when the truth is that these actions were not seeking to harm legal immigrants but legal immigrants and cannot and should not be termed “anti-immigrant” or “dangerous” when the President is simply enforcing the law.

This review clearly reveals that the criticisms made of President Trump area nothing more than broken, twisted, and discredited thinking and reasoning which essentially, when examined, show their falseness and unfair character. President Trump is the President of a nation state and his actions are dictated by pragmatic realities. In short, the President is the chief executive of a nation and not the Salvation Army or a church or synagogue. He is fulfilling his obligations under the law to secure our borders and our concept of citizenship and protect our society from those who would do and have done us harm.