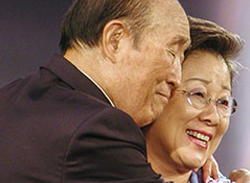 John Kung joined the Unification Movement in 1975. The Yankee Stadium campaign in New York was the first major event he participated in. From there, John participated in the Washington Monument campaign, joined the Mobile Fundraising Team for two years from 1976 and then attended and graduated from Unification Theological Seminary in 1980. After graduation, John pioneered CARP activities on the Drexel U, Temple VCU and Penn State campuses between 1982-1983. He Established CARP at Penn State University and at Virginia Commonwealth.

John served as the commander of the International One World Crusade (IOWC) for one year in 1985. In 1984, he became the regional director of the International Chinese Association and FFWPU USA State Leader of Michigan in 1987, then of Queens and later on, Brooklyn. John currently serves as the pastor of the Queens Family Church and the New York City Ambassador of Peace coordinator.