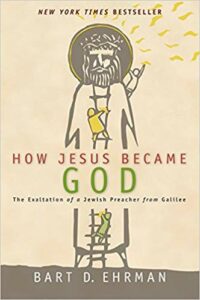 Within the past few days, I encountered two remarkable events, at least so to me. In the first one, I had a short conversation with a person I have nothing but good to say of, but he did say in a passing conversation that Jesus never claimed or said to be god. I countered that Jesus claimed in several instances to have the power to forgive sins, clearly something no human claimed to have the ability to do and I noted that was a claim by him of his divine nature and the young man said as I recall that he did not believe this claim.

The second concern I would like to address is a most interested book entitled “How Jesus Became God,” by Prof. Bart Ehrman, a Professor of Religious Studies at The University of North Carolina at Chapel Hill. I certainly am far from occupying anything approaching the position held by Prof. Ehrman, but he says the same in a slightly different fashion, namely that Jesus did not actually claim to be god nor did the disciples say that during Jesus lifetime.

I would like to examine the views and position of the person who I had the brief conversation with, with an examination of Prof. Ehrman that Jesus somehow moved from being at best a Jewish prophet to being regarded as god.

These miracles are either reporting true events or are, as I said, fiction and lies. To those who say they are lies, I have found your words are most unconvincing and ultimately are rejected and carry in the end little or no weight. In sum, these miracles are, I think, to be taken as true reporting of the claim of Jesus to be god. The claim was contemporary; the New Testament manuscripts are numerous and close to these events. Jesus made a claim that all of us are compelled to intellectually and spiritually deal with if we are to engage or try to be in the court of intellectually honest thinking. I would note that I have analyzed and set forth the reported miracles and miracles are similarly reported in the three other gospels, Mark, Luke, and John. Either Jesus is god or a lunatic and a madman for making these claims or, rather, the authors of these gospel are the same lunatics and liars.

Many other sayings and statements reported in the gospels support Jesus’s claim to divinity. Mark 5 and 10 predicts his resurrection from the dead. In Luke 9, he predicts the resurrection. In Luke 5 and 7, he claims the power to forgive sins, something no man could and or do except to one who has sinned and injured you which Jesus is not talking about or referring to. In Matthew 9, again Jesus claims the power to forgive sins, something only god can do and no human being can accomplish or attempt. In Matt 26, Jesus foretold his own death, betrayal, and Peter’s denial.

What then can we say, or, in the words of Lenin, what is to be done? The question carries its own answer. Jesus’s claim of godhood and divinity is found throughout the gospels. What you and I would make of that claim is something and is within the freewill and decision of every one of us. Jesus gives us free choice because he wants a truly free relationship based on love and love to exist must come from freedom alone.

I would like to make one last comment and that is I speak of Prof. Ehrman’s introductory words in his book. He refers to Jesus one of the movers of history as a lower-class Jewish preacher from the backwaters of Galilee condemned for illegal activities and crucified for crimes against the state. Prof. Ehrman then states his followers were claiming he was a divine being and Lord of Heaven and earth. Prof. Ehrman asks the question how a crucified peasant came to be thought of as Lord who created all things? How did Jesus become god?

I am shocked and take issue with these words describing this giant of history as lower class and a crucified peasant. I have no objection of peasant if the professor means farmers and those who do manual labor and I certainly entertain no disdain for those who our society may label as lower class. This colossus of history was poor, a carpenter, and chose as his disciples fishermen in part. Perhaps Prof. Bart should revise his thinking to follow Christ in his conclusion that intellectualism can be found in all sectors and one cannot assume and should not engage in the incorrect assumption that lack of education and wealth disqualifies any of us. I remind the professor that these so-called peasants transformed and remade the known world in 400 years and continue to do so. I speculate that these statements seem to reflect the professor’s opinion of himself as superior because he is literate and nothing more nor less.