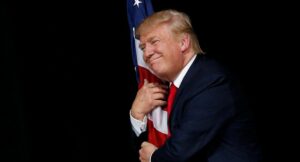 “A Comment and Critique on an Article in America Entitled, ‘Christianity in Trump’s America,’” by Daniel Philpott, Professor of Political Science at the University of Notre Dame, by Andrew J. Schatkin

The other day I had the opportunity to read a most informative and wonderful article in the America, the Jesuit Review of Faith and Culture, dated Sept. 2, 2019 pp. 38 and 39. Let me make clear that I am a great fan of the Roman Catholic church and in particular of the Jesuit Order and community I am a full backer of this ancient church and of Jesuit spirituality and the Order’s commitment to social justice and to its equal commitment to the eradication of income inequality and all forms of poverty and to all forms of racism and sexism and in short all forms and types of discrimination. I abhor what I have just referred to as a believing Christian albeit a Lutheran believer.

Yet, despite my shared deeply held faith with this church, and this Order, and this author, I have points of disagreement. The professor questions the President’s faith but does not understand their adulation of him in light of his defilements of dignity in private and public. The professor refers to his killing of civilians and torture of the same in the war on terror; his speaking disdainfully of women; mocking the disabled; tweeting racist remarks; and deriding an entire class of human beings including Muslims and immigrants. This writer later states that people use Christianity to justify Christian nationalism, and seek to harm the weak, including refugees, the poor, women, people of color, and the LGBT movement.

I take issue with these statements, as they lack a factual foundation. First, the Professor casts moral judgment on the President and those who voted for him questioning more nor less their Christian faith. Jesus commands us not to Judge lest we be judged in the same harsh judgment and fashion. If there is to be any sort of judgment, it will occur at the last judgment in the mind and words of Jesus as Judge. The professor is not Christ and is in no position to judge, which is the sole role of god and Christ. Second, the professor engages in blanket conclusions saying things about the President and his voters with no reference to events of facts.

The President has nothing against immigrants and refugees but against persons entering this country illegally and manipulating our system to get medical benefits, employment, and education, and gaining the right to vote and reside here, having no right to do so other than the shouts and cry of racism, compassion, and love. He is said to dislike Muslims. This President has no prejudice against Muslims but upon taking office was faced with a situation of a continued series of violent attacks by a thing minority of our Muslim brothers and sisters from some few countries, not the largest with Muslim population such as Egypt, Indonesia, and Nigeria.

There were violent attacks on NYC, Orlando, Texas, SC, and California. The Coptic Church in Egypt has been under siege by Islamic fundamentalists and there have been similar attacks in Sri Lanka and Pakistan, and a virtual genocide in the Middle East. In 2019 there have been planned attacks and plots such as the knifing of a Paris professor; the murder of a professor in Iran; a number of attacks in a Chicago mall; and many others. The President has no racial motives but correctly acted in concern for the lives of American citizens and on the basis of national security.

The president is no racist but ran a huge and diverse business in the most diverse city in the world and in controlling illegal immigration he has preserved employment for minority communities, black and Latino, by barring illegal immigrants from taking these job with their no benefits and low wage labor. The accusation of his being against women is belied by the fact that no doubt millions of women voted for him and in his pro- life position he has undertaken to take the position to save the lives of thousands of female babies and has sought to stand up for our poor black and Latino brothers and sisters who are the prime victims of abortion a black and Latino genocide. As for poor women and people of color, he has done nothing but help and assist. He has a concern for refugees knowing that within that group are some terrorists that can and will do us harm unless their presence and admittance is carefully monitored and vetted. He is truly Israel’s most firm backer who is the victim of unremitting attacks by their Arab neighbors or at least terrorist groups from those surrounding Arab countries attacks which have continued since Israel’s founding. The Holocaust must never be repeated or allowed to be repeated.

It is quite clear with utmost respect for the professor that his positions, even if fully understood and agreed with, are significantly weak. Without truth and facts and data, the people must perish, and I ask the professor and America to rethink these position as articulated in this article and take an honest look at all the facts and not engage in condemnation of this Chief Executive and not assuming those who voted for him are stupid and ignorant. After all, Jesus himself was a carpenter, the disciples fisherman, and St. Paul a tentmaker.