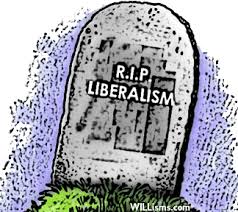 “Liberalism and the Liberal Ideology are Dead and Deceased and President Trump Signed the Death Warrant and Nailed the Coffin,” by Andrew J. Schatkin

I would like to talk a bit about the liberal ideology and suggest that it is not only dead and deceased, but also say that the President signed its death warrant nailed down the coffin and suggest the reasons for all this.

Liberalism for some decades presented itself as the agency and party and ideology of love compassion, civil rights, the rights and champion of blacks, Latinos, and women, and, to some extent, succeeded in convincing people of its truth and validity. So we love illegal immigrants; we are the champions of women when we all know half of the abortions performed involve female babies and most victims of abortions are blacks and Latinos.

I would now like to comment on this ideology and what my left wing friends like to claim. I have before me a lengthy essay entitled “Trump Administration Civil and Human Rights Rollbacks,” by the Leadership Conference on Civil & Human Rights. Let us take a few moments and walk through this somewhat lengthy litany of the sins of the Trump Administration. The document says first that the first Muslim travel ban discriminated against Muslims and refugees. The President responded in this Order to a lengthy series of attacks by Muslims from some few Muslim countries and societies that caused the death of many American citizens in Boston, Florida, NYC, Texas, and many other places. These attacks have continued on a worldwide basis against Coptic Christians in Egypt; Christians in Nigeria; and Christians in the Middle East and in Pakistan and Sri Lanka.

This travel ban was not an act of discrimination but his correct position to secure our citizenry from possible death and suffering at the hands of Islamic fundamentalist terrorists. Recently, a professor in Paris was knifed to death by a student who claimed he had insulted the prophet Mohammed; the same thing occurred to a professor who was murdered by a student who claimed he had insulted the prophet Mohammed. In Germany, a truck was driven into a crowd by a jihadist causing injuries. Another man was accused of being an ISIS sniper; he had relocated to syria for six years, given material support to jihadists, and stated he would take up arms if freed in support of terrorism. Also, there was a mechanic who tampered with a jet liner was accused or terrorist ties. In addition, there was an army private was accused of distributing bomb information and seeking to join radical groups. Moreover, there was a Bronx man arrested at JFK airport for plotting to join the Taliban, and a19-year-old Queens teen was charged with plotting a Isis inspired knife attack. Also, a Queens woman pled guilty to NYC bomb plot. Finally, a Missouri man pled guilty recently to a terrorist attack and plot on buses and trains. These incidents are from the year 2019. It is ludicrous in the face of these facts to reference the President’s completely necessary decision in and on behalf of national security as discrimination when the facts are these attacks have emanated from a minority and few in some Muslim cultural and political systems.

It is noted with criticism in this document that in 2017 Homeland Security issued a memo expanding the number of people subject to deportation. I say that if anyone is illegally here and violating the law, they should be subject to deportation and this memo from Homeland Security cannot be seen a discrimination or anything resembling it. In this same document, it was noted with criticism as a civil and human rights rollback an order restricting travel to the US by citizens to Iran, Libya, Somalia, Sudan, Syria, and Yemen. Again, in light of the attacks and deaths caused by these systems, this is nothing more than a reasonable response to Islamic fundamentalism which has had a long history of these acts of violence.

This long litany of alleged inhumanity and wrongdoing by the Trump administration noted that Sessions announced the administration was rescinding the Deferred Action for Childhood arrivals of the DACA program. The position taken here that that this is a Civil Rights Rollback is reductio ad absurdum. These individual children and parents came here illegally; are here illegally; and all are in violation of our legal system. They have no place and no right to be here and it is pushing the envelope of reason to accused the president of rolling back civil rights when these individuals have no rights. The action referred to here is not any sort of moral or legal violation; is a policy to have a society based on law and the concept of citizenship.

The document speaks of a border wall and curbing grants to sanctuary cities. The border wall is a completely appropriate policy and attempt to prevent the massive illegal entrance that has been occurring and has been the case. There is no evil or sadism here and if sanctuary cities are funded, then we are funding shielding people and persons illegally here who have no place anywhere in this country and certainly deserve no sort of protection or sanctuary. Sanctuary is for the innocent not to protect violators of the law.

There are many other examples of alleged Trump administration civil and human rights rollbacks. The liberal position as I have set forth in this response is untenable and misleading. To adopt the positions maintained in this document is in defiance of reason. The President is the chief executive of a nation where order and law must be maintained. The liberal shouts of love and compassion and civil and human rights will and can no longer work because they are not true. The liberal defense on illegal aliens having the right to be here and to be afforded the rights and benefit of citizens stretches reason too far. The screams of racism and discrimination are no more than shouts of slander and the live of political correctness. They no longer work. Liberalism and the liberal ideology based on political code words such as ‘race discrimination’ and ‘rights’ are now seen as nothing more than a mechanism to mislead and hide the truth.