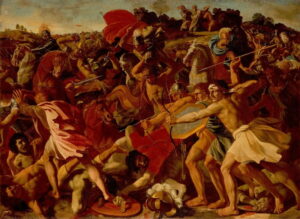 “Is the God of the Bible Violent, and Did He Command Evil and Violence?” by Andrew J. Schatkin

The other day I had an online conversation and the person I spoke to broached an interesting issue that raised my consciousness and challenged my understanding and thinking of the God of Israel in the bible, or perhaps, better put, the entirety of the biblical revelation. We were talking about terrorism and acts of violence on the part of some small minority of the Islamic political / religious / and culture in some Islamic countries and societies. My friend countered that Christians kill too and it is certainly true that Christians do kill and that action is condemned in the Hebrew bible as sin and is equally condemned even more strongly by Jesus who says that anger is equivalent to murder and commands to turn the other cheek if stricken and tells us to love our enemies and pray for those who persecute us. Jesus, far from condoning killing, raises the moral bar on that issue substantially.

My friend then countered and questioned me what of the God of Israel that seems at times not only to approve violence, condone it, and command it, but does so himself. I was somewhat stymied at the time. But having reflected on the issue and matter I say this. It is clear that violence is present in the Old Testament world beginning with the first murder in Genesis 4, the story of Cain and Abel. Perhaps the most telling and disturbing action of a violent and punishing God is found in the story of Noah where the entire human race in the known world is made to suffer destruction in a terrible flood along with all animals because of human corruption and violence. Clearly, the story of Noah reveals an angry and violent God. In genesis chapter 11 God is seen as scattering humanity who had built a vast tower to heaven again an act of punishment and even violence. In Genesis chapters 18 and 19, we have the story of the cities of Sodom and Gomorrah destroyed for what appears to be their sexual sin of homosexuality. The entire inhabitants of these cities are wiped out and killed by God himself, just as he is represented as acting in the flood story in one instance destroying all humanity and living things in a flood and then doing the same for the sin of Sodom and Gomorrah that, we are told, was intolerable in his sight. The story of Sodom and Gomorrah was related in Genesis chapter 18. I give two other examples of the apparent violence attached to and exhibited by the God of Israel. In Exodus 11, we are told the first born of Egypt are made to perish and die by the Lord. Finally, in the books of Joshua and Judges, the Lord commands the destruction of the people of Canaan by the people of Israel, and in Judges chapter 5, Jael murders Sisera by driving a tent peg into his temple.

What then are we to make of this violence caused by the God of Israel and, if caused, then commanded and endorsed? Is the Judeo-Christian God a God of pain, suffering, and violence? Let me suggest how to understand these passages and their representation of God at the time. I say this: the Jewish people were like all peoples at that time, primitive and basic in their comprehension and thinking. This is who they understood God and the world and how they interpreted it. It was only by a gradual process that they were made ready and prepared for the much more advanced revelation of God’s nature by Jesus—a God of unconditional love and a God who came to rescue the lost and did not come to kill and condemn. The full and true understanding of God’s nature as the source of love itself had to be revealed gradually when humanity had reached the level of comprehension and understanding to grasp Jesus and his gospel of love and forgiveness. The Old Testament God was a God seen through the eyes of a primitive people that could only understand the nature of God as it was presented to them in the basic and primitive fashion I have just described. Over the passage of time, God revealed more fully on a gradual basis his full and nature when the world was ready for this.

I hope I have shed some light on this issue and question and can only say that the Jewish people at the stage they were in saw the world in these terms and understood the world only in these terms until God in the fullness of time chose to reveal his nature to those people, both gentile and Jew, that could come to understand God in his fullness and in his depth, or better put, in the depth and profundity of his eternal and undying mercy and love.

I hope this explains and clarifies everything.