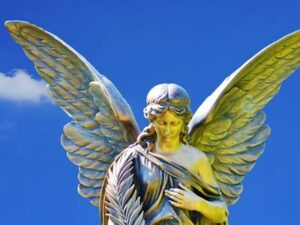 In our society, today or at least in the secular West, which might be said to include both North America and certainly western Europe, the idea and concept of angels and demons for many people is seen as either mythology or the product of a primitive culture and thinking. In fact, many people might be inclined to laugh at people who have a belief system that includes angels and devils. Yet, for Christians, angels and devils are very real beings and in fact are quite frequently mentioned in the bible where they are portrayed in various roles and situations. In this essay I would like to talk about angels and would like to walk through certain scripture passages which talk about angels. I am not going to discuss the many references in the bible to those supernatural beings but will examine a few.

Angels are mentioned frequently in the first book of the bible, the book of Genesis. For example, in Genesis 16, an angel finds and speaks to Hagar, the maid of Sarah the wife of Abraham, and converses with her. In Genesis, an angel speak to Abraham when he has been commanded to and is about to sacrifice his son Isaac (Gen 22). For further passages in Genesis referencing the activities of angels see, Gen 22; Gen24; Gen 3l; and Gen 48.

Again, in the gospel of John 20, two angels are present before the tomb in which Jesus is laid. In First Cor. 4, angels are spoken of and in First Cor 1, it is said a woman ought to have a veil on her head because of the angels. Angels are mentioned again in most of the letters of Paul including his letters to the Hebrews and in the letters of Peter and Jude.

I would like now to discuss based on certain passages in the bible what role angels play and what they may do. We do know that angels were created along with the entire universe. In St. Paul’s letter to the Col. church in chapter 1, Paul states that Jesus created all things visible and invisible on heaven and on earth. In Psalm 148, the psalm states that god created the angels. According to the scriptures, angels have certain tasks assigned to them. For example, in St. Paul’s letter to the Thessalonian church 1, it is stated that Jesus will be revealed with his angels. In Acts 12, it is stated that when Herod did not give praise to god, an angel of the Lord struck him down. Most important angels are assigned to worship and glorify god. In St. Paul’s letter to the Hebrews 1, Paul writes “Let all god’s angels worship him. In Rev. 5, angels also seem to act as messengers. See Acts 27 where an angel visits Paul bringing him hope and courage as he has to stand trial before Caesar.

These are just some of the things the bible seems to say that angels are assigned to do. In the story of Sodom and Gomorrah, in Genesis chapter 19, two angels come to Sodom and destroy the city. In the birth of Christ narrative, angels appear to shepherds. In Matt 1, an angel appears to Joseph in a dream telling him to take Mary and his child and flee to Egypt. See also Luke 2 where angels appear to the shepherds and inform them of the birth of Christ It is clear from these examples that angels have fairly prominent roles and duties in the biblical narratives. Angels’ roles, it appears, are mainly to praise god in heaven, which is constantly mentioned in the bible. (See Psalm 103). Also, there appear to be various classes of angels. Mention is made of the seraphim. In Isaiah 6, Isaiah states that one of the seraphs flew to him with a live coal which he had taken with tongs from the altar. Isaiah states that with this coal the angel touched his lips thereby taking his sin away. The second class of angles is the cherubim and they are mentioned in Gen. 3; Ex 26; Psalm 80; and Psalm 99; and in second Samuel 22. A third group of angels are the archangels such as the archangel Michael in Rev 12.There is mention in the bible of the Archangel Gabriel in Luke 1.The Archangel Gabriel appears also in he gospel of Luke where Gabriel says to Zacharias that he stands in the presence of god and was sent to speak with Zacharias that his wife would bear the son John the Baptist. The angel Gabriel also delivers a message to the Virgin Mary.

There is also the fact that there are a group of fallen angels led by Satan. God gives all human beings, including angels, free will and at some point Satan and his demons chose to rebel against god. This battle between Satan and the holy angels is described in Rev. 12 and in Ezekiel 28 and in Isaiah 14.

This concludes the first part of an essay on angels. The second part will continue to analyze the role and nature of angels in the biblical text and will consider the nature and existence of demons in the biblical revelation.