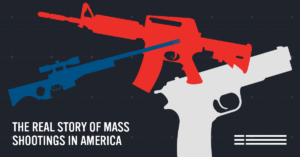 “Is the Issue Gun Control?” by Andrew J. Schatkin

I and all of us have witnessed a tragic series of mass shootings, many of them in our schools where we have witnessed the tragic death of many of our young people just at the beginning point of their lives. The tragedy is immeasurable and is beyond comprehension. Many say that these shootings and, if you will, massacres due to the ready availability and ease of purchase of guns in our society. I find this explanation inadequate and weak and not dealing with facts and factors that should be grasped and understood. First, there have been many of such attacks and many have involved not the use of guns but vehicles and knives. No one has suggested to control these acts of violence, many of which emanated from radical Islamic forces, albeit on the part of a minority in those countries. Let me make clear that I have nothing but love as a Christian for my Muslim brothers and sisters and well know the love Jesus has for them and that he died for all humanity and for all persons who embrace Islam. Also, I have no hostility or animosity to our Muslim brothers and sisters. The facts and truth of these attacks are. So, the issue is not gun control.

Second we must look at understand the cause and reason for these horrible shootings. There is a significant spiritual issue in our society, which is materialistic in the extreme and consists for many people buying their next car, getting their next smart phone, and purchasing their next pair of designer sneakers. Prayer and bible reading were some time ago removed from our school system on the ground of violation of the establishment clause of the U.S. constitution. That removal in a multi-cultural society could be justifiable on that basis. I disagree, however, and note that for many hundreds of years, bible reading and prayer were present in our schools and only most recently was the issue of violation of the establishment clause raised. I am of the view that the establishment clause was directed to the establishment of state-supported churches such as the Anglican church in the U.K. and at one time the Anglican church in Virginia and New York, and the congregational church in Massachusetts, and was not directed to essentially delete the mention and notice of God from schools altogether. Our coins contain the words “In God We Trust.” The Congress begins with a prayer and the foundation documents of our country refer to god. None of these have been found to violate the establishment clause of the constitution. I say, in taking out the bible and prayer and implicitly, if not actually, substituting the cold, alienation of secularism, we have brought these attacks about. Our world of social media, cell phones, and emails have served to divide and separate us all into a system of lonely, cutoff, separated persons seeking for but not finding love or even companionship. In these shootings, our young people cry out for notice and, as I said, love in a society which has abandoned god, the god of love, and handed to the next generation loneliness and a society without spiritual meaning and depth. We castrate the geldings and bid them be fruitful. Are the words of the bible so dangerous? Is prayer a threat and something to be feared? I ask those who oppose my viewpoint what would they have and what would they substitute. What our society based solely on money values has produced is here and obvious and it is to be dreaded and feared.

Finally, I point out that if the issue is the availability of guns for purchase, I well know that any gun can be obtained through illegal channels. Guns are fully and easily gotten and obtained. The issue is not purchase. Any criminal can easily obtain a gun. This argument falls entirely flat.

I conclude my analysis of the cause of school and other shootings and offer here some thoughts on the matter and do hope they will be the basis for reflection and provoke intellectually honest discourse.