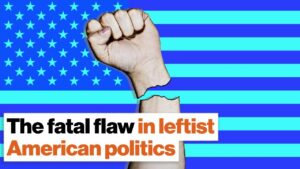 “The Western Liberal Ideology: Some Mistakes, Fallacies, and Misconceptions in its Presentation,” by Andrew J. Schatkin

I would like to talk about the presentation in the media and in general in our society of the Western Liberal Ideology. The sources of this ideology with which I have points of agreement can be found in the Media and the academic sector. Hollywood also has its backers of this worldview. I now propose to point out fallacies and faulty thinking found in the liberal ideology.

Liberalism takes the position that it has and is the agency of love and compassion and civil rights and is most concerned about racial and religious injustice and prejudice. So our left-wing friends who support this ideology will claim the ground of love and compassion for migrants entering this country illegally and say President Trump is the evil bogeyman for seeking to enforce our borders and take legal action against those who seek to enter our country illegally and in violation of the law. The liberal left has much love and sympathy for illegal migrants but say nothing and exhibit no concern for the many struggling Americans in poverty or make no mention of them black, Latino, Asian, and white.

The liberal left make no mention of jobs taken away from poor Americans by no-benefit, low-wage illegal workers. There are 45 million poor and poverty-stricken Americans on food stamps in desperate economic straits whether in the U. S. South, Kansas, or Brooklyn or the Bronx, or Idaho. The fallacy if not lie in the liberal ideology is obvious.

The proposed border wall is not the action of an evildoer but is a valid attempt to secure the borders of our country and not to have a society where the concept of legal citizenship is eliminated and where illegal entrance equals gaining citizenship, which is fully available by and through legal avenues. Let me speak of two more examples of left wing ideological thinking I regard as faulty and misleading. One is the word “undocumented,” where the reality is “illegal” and the completely unfair and misleading characterization of President Trump as anti-immigration when the reality is he only enforces the law as to persons who have gained illegal entrance and seek to manipulate this system to gain rights and medical, educational, and employment benefits they are not entitled to and thereby make fools of us all.

Let me also take a look at the liberal left view and take on abortion. The liberal ideology takes up the cudgel of women’s rights on this issue, saying a woman has the right to control over her body. This position has some truth. But the liberal position fails to take full account that we are talking about millions of lives with no defense. Christians take the view that Jesus died for all humanity from inception to the point of death, including the mentally-challenged and disabled. He makes no distinctions in the value to be accorded to that person which is eternal. Moreover, most abortions are performed on poor black and Latino children and half are female babies. The left ideology fails to address these facts and issues and ignores the compelling moral issue that a living being is being consigned to the refuse heap and the garbage can and that person is often of the most poor and indefensible sectors of society.

Let us now talk of the left’s cry that the President is racist in his opposition to emigration from certain Muslim countries. I must make clear that I have as a Christian no hostility or prejudice to our Muslim brothers and sisters, who Jesus I know equally treasures to save and rescue. Nonetheless, the left ignores the significant series of acts of violence emanating from certain Muslim countries. Also, the ban excluded very populous Muslim countries such as Nigeria, Egypt, and Indonesia. I am quite sure most Muslims are honest, law-abiding, and hard-working family people. Yet there have been horrendous attacks by radical fundamentalists in the U.S., Europe, and Russia, and longstanding attacks on Christians in Nigeria, The Sudan, and Coptic Christians in Egypt. There has been a constant and long standing genocide of Christians in the Middle East by radical Muslim fundamentalists and they have not stopped to this day. My left-wing friends counter that Christians kill too, but fail to recognize that they do so in violation of Christ’s many commands in that respect and do not act at the commands in the Koran to kill infidels, apostates, and the recommendations concerning the subjugation of women. In addition, Muslims are often trying to flee Muslim societies where they are oppressed, and come to Christian countries where there is freedom and human rights.

The left ideology ignores these facts and as well ignores comment on Mother Teresa and Dr. Albert Schweitzer, both of whom devoted their lives to helping and serving the poor; nor does the left speak of the Salvation Army that for 150 years has brought the love and aid and help of Christ to the poorest of the poor in our western urban ghettos.

This concludes my critique of the fallacies, misconceptions, and faulty thinking of our left brothers and sisters. I can only say I find their thinking on the issues I have been spoken of faulty and largely not looking at matters wholly and clearly. I, as a Christian, have every love and consideration for my Muslim and migrant brothers and sisters, but seek to be intellectually honest in the matters of speak of.