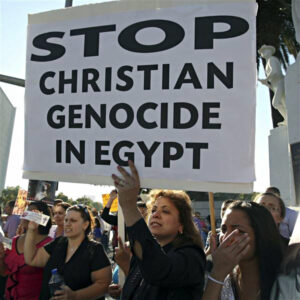 “The Deafening Silence of the Left on the Persecution of Christian and Jews,” by Andrew J. Schatkin

I would like to talk about a matter that should be of great concern to us all, and that is the virtual worldwide persecution of Christians in Africa, the Middle East, and China, and the unremitting attacks on the State of Israel by its surrounding Arab neighbors. The left has much to say about Islamophobia, white supremacy, and, more specifically, the recent attack on the Mosque in New Zealand and also, some time ago, the attack in Charlottesville, Virginia. Let me say and make clear here that these were horrendous and murderous attacks that do deserve world condemnation. These crimes cannot be bypassed and I do not excuse or ignore these events and the loss of life. But for sometime there has been a worldwide persecution of Christians that the left media perhaps finds not worthy of comment at all. It appears these persecutions of Christians and Jews the left media either chooses not to report because it is indifferent to the lives being taken and that are the subject and object of persecution.

Please join me with a review of these events.

The day after Easter a family of 4 Christians was murdered, leaving a 12-year-old survivor. Before the Easter holiday, a mob hurled bricks at Christians and Christians were beaten with clubs by a mob; two years before on Easter Sunday a jihadist bomber killed 18 Christians in a Park. A year ago, a gang of police officers beat an 8th grade Christian student to death. All of these incidents were perpetrated by radical Islamist fundamentalists in Pakistan.

A few days ago, 39 innocent Christians were killed in Nigeria. They were killed by radical Islamists. Boko Haram, a radial Islamist group, recently murdered 45 Christians. Leah Sharibu is one of 110 schoolchildren kidnapped by Boko Haram and is still being held captive. In China, the police arrested more than 200 Christians in 2016 and brought charges against 27 Christians, charging them with organizing evil cults to obstruct law enforcement. In May of 2018, 10 Muslim men brought a crane to destroy a church. In September of the same year, several Christians were beaten and injured by the same group.

Again, when I speak of these incidents, I hold no religious prejudice or hostility to Islam, but merely mention them as ignored by the left press and media. In Sudan, 13 Christians were tortured and 12 Christian men were rounded up for preaching the gospel. In 2014, Sudanese officials made a statement that no new churches could be built. In Egypt, radical Islamic terrorists murdered seven Christians traveling by bus from a monastery and 19 Christians were injured in the attack. The Coptic church in Egypt has been under significant persecution from the forces of radical Islam. 60,000 Christians have been killer in Nigeria since 2001. Since 2011, Boko Haram ahs murdered 37,000 people and Boko Haram has pledged allegiance to Isis. In December of 2018, police raided the Early Rain Covenant Church and 80 church leaders were arrested. Recently in Pakistan a trial court sentenced two Christian brothers to death for blasphemy. In Iran, Pastor Youcef Nadarkhani was arrested in 2009 and was sentenced to death for apostasy. He spent 3 years in prison and in 2018 was again arrested and beaten. In 2019, 22 Christians have been detained and face criminal charges, all members of the Early Rain Covenant Church. Pastor John Cao, a legal permanent resident of the U.S., was wrongfully convicted of organizing illegal border crossings and has been wrongfully imprisoned in China for two years. Pastor Brunson, an American citizen, was wrongfully detained in Turkey for over two years for his Christian faith. In Sri Lanka, hundreds of Christian worshippers died in an Islamist suicide attack and a Hamas attack on Israel followed shortly thereafter.

These are just a few example of the worldwide persecution of Christians and Jews. The persecution and attacks on the State of Israel have been and are unremitting. The persecution of Christians is equally constant, troubling, and tragic. The left has little or no comment about these tragedies. I ask if a Christian or Jewish life is worth less than other lives. Do the tragic losses of life in the Mosque attack in New Zealand and the deaths in Virginia have greater value than the unremitting deaths and murders I have just described? I ask my friends of the left, my brothers and sisters, if you will, why is there no outcry why is there no shout of condemnation? You have a great deal of concern for persons illegally present in the United States, but none for the deaths and suffering of our Christian brothers who throughout the world continue to be persecuted, arrested, imprisoned, tortured and die, and none for our Jewish brothers who continue to suffer from decades of attacks.

Where is your compassion and humanity that you so readily claim and so readily cry when Muslims die? Why is there a double standard?