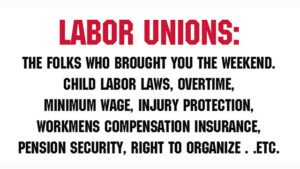 “Why We Need Unions: Another Look,” by Andrew J. Schatkin

In a previous book of mine entitled “Essays on the Christian Worldview and Others,” I wrote a short essay “Why We Need Unions.” In that essay, I argued that since workers lack a balance of power with respect to their employers, unions are necessary and enable workers to obtain an essentially middle class standard of living.

In December of 2012, over four hundred workers in two recent fires at Asian garment factories, which manufacture clothes for European and American brands, died. The accounts of these fires in Bangladesh and Pakistan seemed to indicate that there were few, if any, safety standards present. Indeed, the owners of both factories had barred windows to prevent theft and that there were no usable safety fire exits.

Although one can argue that the lack of safety standards and safe fire exits are the reasons for the deaths of these workers, the most exact reason is that those countries probably do not have or permit the unionization of workers. The New York Times, in an editorial dated Dec. 10, 2012, noted correctly what had happened. To analyze the situation more closely, one can speculate that the garment factories in which workers lacked union protection and lacked safety mechanisms are the result of the outsourcing of jobs to third world countries which use third world labor at a fraction of the cost we pay Americans. This outsourcing essentially caused this tragedy. There have been efforts made by labor group in these companies to establish unions and there has been great difficulty in that area and opposition to that movement. Labor organizers have even been murdered in their efforts to improve working conditions for third world workers This particular tragedy and others in Bangladesh and Pakistan demonstrate that when unions are not permitted to be established to protect workers in their jobs and working conditions, this will be the result. It is unfortunate that many businesses are only and completely after profits will oppose unions in order to gain greater profits through the cheap labor force in these third world countries where people are desperate for any kind of employment.

It is a travesty that the American people should buy goods from these countries through the burned and murdered bodies of persons who are desperate for any kind of income to survive. Unions, if permitted would put a stopgap on these sorts of horrible tragedies. More to the point, can the American people, or any person in good conscience, purchase goods manufactured over the dead and burned carcasses of their fellow human beings? The issue here is, more exactly, shall we and should we permit profits to be made over the suffering and death of other human beings?

One last word: As a Christian who is committed to the historic Christian faith and to the full authority of Holy Scripture, I have no option but to endorse and support the unionization of workers. The followers of Christ were the working class. He called Peter and his brother Andrew out of their fishing boats to follow him and they did so. It was said of Jesus, “Who is this man that eats with publicans and sinners?” and “Can anything good like Jesus come out of Nazareth?” He said of the poor and poor in spirit that they were blessed. His followers were sinners and beside him on the cross were two criminals. On this issue, the Christian faith leaves me no option. I I urge all of us to support the unionization of workers in China, India, Southeast Asia, and Pakistan in recognition that these laborers bear the divine stamp placed on all and borne by all.