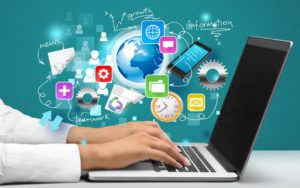 For some time now, ever since the advent of television in the late 1940s, print as the primary mode of mass communication has experienced a severe decline in publicly. At one time there were many, many newspapers, expressing many different viewpoints including a Communist newspaper. The Daily Worker. Many, many viewpoints and opinions were expressed in these dailies. With the coming of television, computers, the internet, DVDs, VCRs, iPods, camcorders, cell phones, text messages, emails and myriad other forms of communication, print as the primary expression of mass communication and thought, has taken a back seat.

Although many books are published, I think people read less, although I cannot be sure of this. In addition, we are constantly bombarded with a succession of images where politicians, rock stars, entertainers, sports figures or various celebrities are currently in, or are thrust into the public eye. Let me take a moment and look at the pros and cons or the technological revolution. First, there has been a speeding up of information or, better put, communication is faster and easier. Second, distances are to a large extent eliminated with this technology and as a result people in other countries are easily reached and communicated with. In this sense, relationships in a way are more easily available, although the person may be far, far away. Third, the task of writing is made easier since editing and changing written content is made easier with computers and word processors. Finally, with word processors writing is made an easier task. These, I believe, are the good effects of technology.

Let me now indicate the deficits of this massive change. With speed does not come quality. And so writing is often careless and poor. Moreover, a quality and in-depth piece of written work takes time. If hurriedly done and composed, the essay will be, shall we say, glib, and lack thought where speed is substituted for thought and reflection The messages we see governing our society are often clipped, lacking thought, and ungrammatical. The end result is a society which cannot think as it is lacking time and well-thought-out communication.

Cell phones, emails, and these sort of shallow forms of communication give rise to a propaganda mill where people may be and are convinced by slogans and, if you will, sound bites. For example, there is the constant repetition of the slogan, ‘Trump is a racist,’ a propaganda slogan without factual foundation. I think there are two effects of these developments I have just described. With speed and the constant bombardment of images come the inability to focus and concentrate. The person’s mind is distracted and in a sense loses the ability to discern detail and thought on an exact and critical basis. In addition, speed results in more production but less quality, as I mentioned, and less thought. Thus images and speed distract and perhaps confuse. Not only does this speed and image bombardment result in the inability to focus and concentrate but they give way or room for the big lie or better put propaganda.

When the public sees as image, but knows nothing of it and in this image and the repetition of a few words is thus faster and faster and more constantly put on the person’s mind and consciousness, that person will be confused and unable to discern wherein lies the truth. Many politicians claim to write books. I cannot say whether they are the authors or not but they are making a representation to that effect. The problem occurs when a constant succession of mindless expressions are cast on the public, the truth is hidden, and lies are accomplished. The lie can be so convincing that a terrorist will kill and commit suicide for Islam. The lie can be so massive as to convince the public that money, greed, materialism and raw power have actual value and should be respected. Truth can be covered up by lies about persons in the public eye, lies not admitting meritorious persons to the public eye, lies featuring whomever the lies want to feature and what the lies wants to say.

It is important for us all as a society to the let the truth, which is often hidden, emerge in thoughtful discerning books presented by knowledgeable persons who have something to say. The book will always be able to present the truth that speedy images and blaring noise will always successfully hide. It is imperative that our society return not only to the printed word, the product of careful thought, but return to the books which having been vetted by time which will always serve to inform and enlighten whether the Bible, Shakespeare, Dante or Milton. Having survived the passage of time, these books contain truths that noise and speed cannot hide. We eliminated books at our own peril. Lies led to racist lynchings. Lies said often enough and frequently enough make people slaves, create false class distinctions, justify the Hitlers, Stalins, Pol Pots and Putins and make fools of us all.

Let me conclude with a few word about some recent events and the left wing ideology, which paints and presents itself as the ultimate humanitarian ideology and a defender of the societal underclass…

An Israeli exchange student was recently murdered in Australia. CNN gave no name to the murderer. There was a women’s march recently in NYC. The Women’s March Alliance described the march as a response to the Trump Administration’s assault on immigrant communities and communities of color. The president has dealt with illegal immigration and has not attacked persons or immigrants legally here and certainly having brought significant employment to black Americans, he has not attacked communities of color. Moreover, the large majority of abortions involve black and Latino babies. His pro-lifeposition is a pro-black and pro-Latino position and it favors communities of color in every way.

Finally, there is a report from ACLJ that Muslim doctor on Twitter called our Jewish brothers and sister dogs; said she was unsympathetic to the Holocaust; and said she would prescribe the wrong medicines purposely to Jewish patients. Her name was Lara Kollab, a first year resident at the Cleveland Clinic. Let me caution my readers that I know that the vast majority of Muslims are law-abiding people seeking to support their families and this was one individual. I have no hostility to out Muslim brothers and sisters who I know the creator god deeply loves. I merely not here that the left media and the adherents of the left ideology, claiming often a humanitarian position, make no mention of these matters I present here.