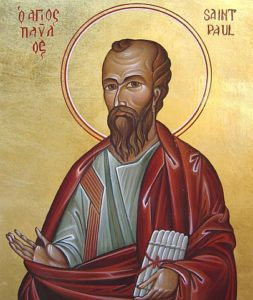 A few months ago, I was watching television and I flicked on a panel discussion about St.Paul and the New Testament. The panel consisted of biblical scholars mostly representing the more liberal Protestant denominations which often, I think, reject the historicity of the bible stories and of tend to refer to them as myths. In the same way, I was a participant in a debate on a television show in which the atheist presenting an opposing Christian viewpoint stated that St. Paul had misinterpreted the Gospel message of Jesus and he said the Saint was something of a fool. I do not attempt to argue with these perspectives on this great Saint and this great historical figure and thinker, but I would like to address these particular views and comments.

In Acts, Chapter 9, it is related that Saul, who formerly had been persecuting the new founded church and Christians, went to the High Priest and asked for letter to the synagogues at Damascus to apprehend Christians. It is related in Chapter 9 that as Saul journeyed a light from heaven flashed about him and Saul fell to the ground and he heard a voice saying, “Saul, why do you persecute me? I am Jesus whom you are persecuting, but rise and enter the city and you will be told what you are to do.”

The men who were traveling with Saul were said to have been speechless hearing a voice but seeing no one. Saul is said to have risen to the ground and when he opened his eyes could see nothing and they led him by the hand into Damascus. For three days, Saul was without sight and neither ate or drank. Thereafter, it is related that one Ananias is said to have told Saul, “Jesus appeared to you on the road by which you came and has sent me so that you can regain your sight and be filled with the Holy spirit.” At that point, it is related that the scales fell from Saul’s eyes and he regained his sight (Acts 9:1-19).

One of the scholars in the first stated panel discussion was of the opinion that Paul’s experience on the road to Damascus and his loss of vision resulted from suffering from epilepsy and a mental illness. First, there is not factual basis to support that opinion, but, more importantly, I think it is completely erroneous and wrong. Anyone who has read Paul’s letters, which are in the canon of the New Testament, can see that they reveal an outstanding thinker. Paul wrote letters to the church in Rome; the Church in Corinth; the Church in Galatia: the Church in Philippi; the church in Thessalonica; and the Church in Ephesus. There are individual letters to a runaway slave, Philemon and to two individuals, Timothy and Titus. These letters are extremely profound in their presentation and thought and are hardly the work of an insane person or an epileptic. These letters have convinced for some 2000 years individuals of all races and backgrounds to become Christians.

Saint Paul made many missionary journeys throughout Asia Minor and Greece. He went to Greece, Corinth, Antioch, and Asia Minor, as well as Ephesus. He is also represented as going to Jerusalem, Miletus, and Caesarea. In fact St. Paul traveled throughout the know Greco-Roman world as an Evangelist.

It begs the question that a person of such intellectual depth who could move world history as did St. Paul was mentally handicapped or an epileptic. I am not convinced that a person of such intellectual depth as revealed in his letters, and of such commitment to an idea, was insane. If that were the case, for some 2,000 years, the writing of a purportedly insane man who saw false visions because of his handicap, have brought and continue to bring the world to its feet. Let me add this final point. If the vision that Saul or later Paul saw of the risen Christ on the road to Damascus was the product of epilepsy or of mental illness, I put forth here chapter 13 of Paul’s letter to the Corinthian church. 1. If I speak of the tongues of men and of angels but have not love, I am a noisy gong of a clanging cymbals. 2. And if I have prophetic powers and understand all mysteries and all knowledge, and I have all faith so as to move mountains but have not love I am nothing. 3. If I gave away all I have and if I give my body to be burned but have not love I gain nothing. 4. Love is patient and kind; love is not jealous or boastful. 5. It is not arrogant or rude. Love does not insist on its own way: it is not irritable or resentful. 6. It does not rejoice at wrong but rejoices in the right. 7. Love bears all things, believes all things, hopes all things, and endures all things. 8. Love never ends; as for prophecies they will pass away; for tongues they will cease; as for knowledge I will pass away. 9. For our knowledge is imperfect and our prophecy is imperfect. 10. But when the perfect comes the imperfect will pass away. 11. When I was a child , I spoke like a child and I thought like a child, and I reasoned like a child; when I became a man, I gave up childish ways. 12. For now we see in a mirror dimly but then face to face. Now I knew in part then I shall understand fully even as I fully understand. 13. So faith, hope, and love abide but the greatest of these is love.

The man who wrote these sentences and produced this thought and who had the vision on the road to Damascus was far from mentally ill or an epileptic. These thoughts that I just have just put here, if they were the thoughts of an, epileptic or an mental case, have affected and inspired more people than most books that have ever been written.