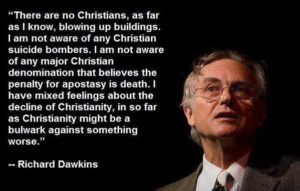 Let me begin this essay by stating that I have no hostility or opposition to our Muslim brothers and sisters. The vast majority of Muslim are hardworking and honest seeking like all of us to support their families. There are a minority, however, within this cultural, political, and religious system, perhaps more pronounced with certain countries in the Middle East that do conduct acts of violence in both Western and non-Western countries. This is an undeniable fact and cannot be evaded or escaped.

I would now like to discuss what I think to be true that the left ideology and media in some sense favor the Islamic society on the matters I have just described.

Certain terms are employed such as radicalized, extremist, and terrorist; the person is described as mentally ill; the attack is sometimes reported as an isolated incident and the product of a lack of gun control. The mainstream media make use of what may be described as cover words to describe these violent attacks and I think evade the truth and facts that these attacks stem from a small minority but are a product of this religion and culture and political system.

At times, the mainstream media fails entirely to report the matter, such as when in
August of 2018 two women a mother and sister were knifed and killed in France and the Islamic state took credit for the attack. In June of 2018, a Queens man was arrested trying to sneak into Syria to join Isis. In May of 2018, men wielding swords broke into an Indonesian police station. Recently, a plan to bomb the national mall was prevented. And in September of 2018, a German teen was arrested for planning to bomb a gay nightclub.

The mainstream media did fail to report or at least did not adequately report these incidents. I would add that many other acts have occurred, perpetrated by non-Muslims, such as the anti-Semitic attack in Pittsburgh and the massacre in l;as Vegas. These attacks were reported extensively.

Does the left somehow bend in one direction on these attacks of violence?
If this is so, I think we must understand the ideological basis for this. The left must maintain that all religions are equal and have equal validity and worship the same god. The adherents of these religions first of all would be very surprised at this statement. The left will also say Christians kill so it is wrong to target Muslims. First, it is true that in the Old Testament there was killing under the Jewish God. With time this ceased and the Christian development certainly did not endorse killing as a lifestyle; Jesus made specific statement in this regard saying that to exhibit anger is equivalent to murder and to look at a woman with lust is to commit adultery. Moreover, Exodus specifically prohibits murder. This commandment was at a very early date Christians throughout the world give acts and works of charity. If a Christian kills or murders, he is not a Christian and is not following a commandment to not kill. This is the difference. Many Muslims do not read the Koran and probably cannot read it since it is in Arabic. However, the Koran contains negative languages as to how to treat women, apostates, and nonbelievers. So I say the left cannot in its ideology deal with the truths I state lest their ideology that all religious beliefs are equal fall apart. Perhaps the left confuses the issue here where it is obvious there is a vast discrepancy between Islam and not only Christianity, but Hinduism and Buddhism.

At least at the present time and age, this problem is, so to speak, confined to a minority in the Muslim religious and cultural system who follow these Koranic directions to act with violence to apostates, non-believers, and direct that women be treated with less than fairness and equality. It is likely that with the passage of time, and as the Muslim world faces and deals with the problem, that the issue will resolve itself peacefully.