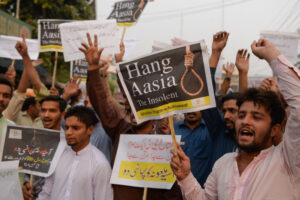 “The Continued Persecution of Christians and a Word on Radical Islam of late,” by Andrew J. Schatkin

Ladies and gentlemen and my fellow thinkers, readers and those of you who reject media and political slogans, and political code words, and choose to accompany me on an engaging and stimulating intellectual journey to get at the truth and the facts and choose not to be fooled and manipulated by forces of lies and darkness, I bid you come with me to knowledge insights and perceptions where by all of us will be guided to some sort of grasp and understanding of reality and what is of ultimate value and what is not.

Today I will continue to address the issues first of Christian persecution worldwide and speak, however hesitantly, of radical Islam and its continued presence worldwide. First, let me say that as a Christian I have only love and good feelings to my Muslim brothers and sisters in Christ, most of who I know to be honest hardworking family persons with no inclination to commit acts of violence. I note that Christian persecution is found in many present-day societies such as China which, far from being connected with radical Islam, is an atheist and agnostic system and state. I am, however, interested in truth, facts, and intellectual honesty and so I now speak of and address the reality of Christian persecution at times on the part of radical Islam.

Christians are persecuted by the forces of radical Islam in Egypt, where the Coptic church is under persecution and siege by elements of the Muslim majority; the Sudan; Nigeria; and Pakistan, where there are blasphemy laws and laws against conversion; Saudi Arabia, where a church cannot be erected or a bible distributed; and the same is true of North Korea, at least in terms of any evangelism or distribution of gospel material and bibles.

Most recently, an American pastor, Bryan Nerren, after 7 months of detention because of his Christian faith, just had the charges against him dropped, allowing him to return home. He is a father and grandfather and for over 17 years has led a nonprofit ministry in India and Nepal. He was arrested and targeted as he stepped off his plane in India. John Cao, a pastor, has been incarcerated for some years in China. Finally, in the Central African Republic, attacks by local Muslims took majority- Christian villages by surprise. Many fled in the middle of the night without even taking time to even change out of their nightclothes. When the smoke cleared, more than 33,000 Christians were displaced to makeshift camps and were unable to return home. The pastor was murdered and as well as five evangelical pastors.

When I point out these persecution and deaths and great sufferings by Christians in the world, I ask the Chinese government, Indian authorities, and the proponents of the Muslim faith to take responsibility for and take control of these acts of violence and these murders and atrocities. We of the west are not to be made fools us; why is there no outcry by the mainstream media of these events? ls it because Christians lack power? Do Christian lives for the left media have no significance and meaning? Finally, last year’s deadly shooting at a military base in Florida was committed by a gunman found to be in touch with al Qaeda. My dear Muslim brothers and sisters, I only ask with all the love I have for you, face up to the truth of these events and the worldwide persecution of Christians by radical Islam, whether in the Sudan, Egypt, Nigeria, and most recently in Florida. Cease the oppression in Saudi Arabia and Pakistan, and go about reforming what is clearly a defective and inoperative system based in the countries where it has majority stat us on oppression force and violence. The time to face the truth and facts is now, and the time for reform and change is now, and it cannot be delayed and it should not be delayed. The cover political code words and propaganda will no longer work. We must all face who we are and as Christians come to know our inescapable sins. I must face myself and the truth and reality of who I am and ask the same of you, my dear brothers and sisters, whoever you are, wherever you are, and whatever you choose to believe.

Finally, I wish to add this story about the persecution of Indian Christians in India. When Ritesh’s family became Christians in India, they began to receive threats from their Hindu neighbors. Then, one day, a mob of Hindu nationalists came to their home and dragged them to the local Hindu temple. Once inside, Ritesh and his wife Vanya and their two daughters were forced to sit in a row facing ten Hindu leaders who threatened them if they did not renounce their faith in Christ. The men harassed and beat the husband and wife in front of their terrified daughters and, after several hours of harassment, the Hindu leaders let the family go. Ritesh was later arrested on false charges, another form of harassment meant to coerce him into leaving Christ. This last paragraph ends this literary excursus about and concerned with the worldwide persecution of Christians, and I end by saying and asking these persecutions to come to an end and cease.