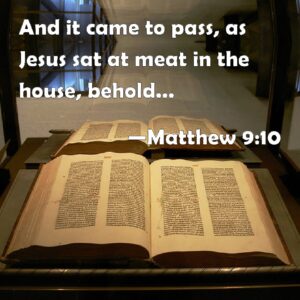 Ladies and gentlemen I bid and ask you to join me in an intellectual journey of honest discernment not for the politically correct but the politically incorrect and you brave citizens whose concern is truth as opposed to falsehood and who reject political code words, media falsehood, and false messages and wish and desire to use their critical thinking faculties to arrive at some semblance of facts and truth choosing to make an honest effort to do so, and not wasting on what the media sources present them with but making the difficult attempt to get to the heart and to the ground of significant thought.

Today I will seek to have you journey with me at one of the most significant sayings found in the gospel of Matthew, sayings which for me and those who reflect on these series of comments of Jesus, are most challenging and require a great a deal of our thinking process. We poor human minds can hardly begin to grasp and understand the mind of god as he speaks to us from holy scripture and from the mansions and precincts of heaven and from the realm of eternity.

Jesus says in Matt 9:9-10, ‘And as he sat at a table in the house behold many tax collectors and sinners came and sat down with Jesus and his disciples. And when the pharisees saw this they said to his disciples, Why does your teacher eat with tax collectors and sinners? But when he heard it, he said, Those who are well have no need of a physician but those who are sick. Go and learn what this means. I desire mercy and not sacrifice for I came not to call the not the righteous but sinners.’

My dear friends, what are we to make of this most radical series of thoughts and messages? The initial issue is Jesus sitting with social outcasts. Tax collectors were collaborators with the Roman imperial authorities and were considered disloyal and suspected of treason. They were also viewed as exploitative since they made their margin of profit by more than they were legally due. I think Jesus’s action here, consorting with the social outcast group of tax collectors, is to tell us and make the most important point that he offers his love and his mercy and his salvation to the most wanton and the most underclass groups in Jewish society. His love and message of salvation and eternal life is not for the elite and those whom the society regards as socially acceptable, but is for the poor and those whom society spurns. It is for those that his love and concern is most telling and great.

He also is questioned for sitting and eating at table with sinners. Who are these sinners? They may be those thought of as ritually unclean and members of despised trades such as an ass driver; camel driver; sailor; herdsman; shop keeper; butcher; tanner; and bath attendant. Again, Jesus’s concern and his eternal love does have a basis on the person’s social or economic status but he offers all his love and charity the more so for being the social and economic outcasts such as tax collectors and ritual sinners. I must add that in the concluding sentence here he makes clear that in the use of the term ‘sinners’ who he was criticized for consorting with he says that it is all sinners and, most important, the moral sinners of the world that he came to save. It is those who are sick and in sin who have need of a physician and their faults not being merely ritual impurity and some sort guilt of violation of the ritual law, but sinners whose lives of sin and even evil actions; it is those he came to save, not the righteous, and it is those who he chooses to be with and dine. Perhaps if Jesus were alive and in our society he would be in Harlem or the Bronx sitting and eating with drug dealers, drug addicts, the homeless, pimps, and prostitutes, the unclean and undesirables of the world for whom he desires mercy and came to save and rescue, not the squeaky-clean righteous of the world, but the unpleasant unattractive and unkempt.

Ladies and gentlemen, this ends my interpretation and explanation of these verses of the gospel of Mathew and I do hope in my own inadequate and humble fashion that I have given you some insights and understanding into the words and mind of the eternal god whose words we can only begin to grasp and comprehend, we poor limited and vulnerable human beings. I have made an attempt at understanding the mind of the eternal god I have seen my effort to be a great honor and privilege and I urge you, my friends and neighbors, to read and reread these verses of holy scripture as well as this essay and join with me in doing so and coming to know the words and being of Christ, who calls all of us to the eternal kingdom as we come to know in him in the course of our lives.