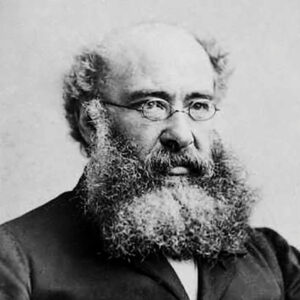 “A Word on One of my Favorite Novelists and Writers, Anthony Trollope,” by Andrew J. Schatkin

Ladies and Gentlemen and my fellow thinkers, readers, discerners and those of you who would wish to join me in another intellectual journey where truth and honesty may be found in a world consisting mainly of political hype, political correctness, and media fads and fashion, and would wish to engage in critical thinking and insights, I would like to talk and discuss one of my favorite British and Victorian novelists, Anthony Trollope. I have had the opportunity to speak of two of my favorite writers, E.M. Forster and Jane Austen. Now I address another of my all-time favorites, Anthony Trollope, a writer immensely popular in his own time. I would add that I have also written a short biography of John Stuart Mill, one the all-time great English philosophers and thinkers noted for his education which began with his learning ancient Greek at the age of three; and again I gave a short sketch of a person I regard as one of the outstanding humanitarians and Christians of all time, Albert Schweitzer, who left his academic post in Strasbourg, France as an expert in J.S. Bach and the New Testament for a life of sacrifice as a medical missionary in then French Africa.

Now I speak and write again of one of my great favorite English writers, Anthony Trollope. This writer, born in April of 1815 and died in December of 1882, was an English novelist and civil servant. Anthony attended the Harrow School for three years from the age of seven. He then went to Winchester College for three years and then return to Harrow. In 1847, his mother moved to America and returned in 1831 and made a name of herself as a writer. Anthony in Belgium was offered a commission in an Austrian cavalry regiment. However, he obtained the offer of a clerkship in the general post office. In 1841, Anthony moved to Ireland with a post office position. Trollope then determined to become a novelist and began writing on the numerous train trips around Ireland. Trollope write four novels about Ireland. He then began writing and producing the Barsetshire novels, which among others include the novel the Warden; Barchester Towers; Framley Parsonage; and The Small House at Allington. These novels were written while Anthony was in Ireland and England and are among my very favorite works of fiction. Just as Dickens portrayed the city dwellers of London poor, the Barsetshire novels portray in sympathetic details the lives of the Anglicans and the town leaders in then-rural villages in England. What is most attractive about these novels is their portrayal of a very gentle and quite social scene in the country counties of England in mid-Victorian England. Trollope portrays the inhabitants of these villages and their vying for power and position on the smallest of pictures with great humanity and understanding, far removed from the frank sexuality portrayed in our mass media. Courtship and marriage are seen as matters of love, feeling, a picture of delicacy, and the work of a mere touch and look. Trollope also wrote a series of novels concerned with the political struggles and events connected with the Pallisers, again a sympathetic and understanding portrait of political intrigue and politics in England of the mid-Victorian era. Finally, he wrote many short stories and a great satire named “The Way We Live Now.”

How can I end this short biography of one who I regard as one the great writers of all time, certainly one of the greatest of English writers? For me, Anthony Trollope remains at the top because of his kind and sympathetic understanding of the foibles and weakness of human nature. He presents people with feelings and great delicacy on the edge of a fingernail. His people are real people with real feelings and when I read his novels I enter into lives of the living, and not into picture of special effects, which show me and inform me of nothing real and helpful and do not lead me in the truths of human nature that Anthony Trollope reveals to me.

ladies and Gentlemen, I ask you to go back and read these books and I know you will be decidedly entertained. Please e mail with your comments on this biography. Much of this material comes from the biography of Anthony Trollope found in Wikipedia.