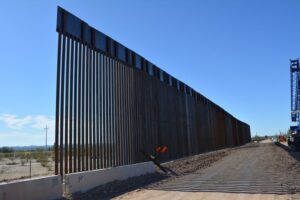 “Open Borders: A Comment on the Proposed Border Wall and a Response to an Article in America, March 16, 2020, by Nathan Schneider,” by Andrew J. Schatkin

Ladies and gentlemen, I present to you my take and response to an article in the journal America of March 16, 2020 entitled “The Catholic Case for Open Borders” by Nathan Schneider. Let me first state that although I am a Lutheran and a regular church attender and adhere to the full authority of holy scripture and in short lay claim to and confess to all elements of the historical Christian faith, I am very much a fan of the Catholic church and its teachings and am also a fan of the Jesuit order and attender of America media meetings as often as I can in New York City.

Today I am going to comment on and talk about a very interesting and engaging article in the America media edition of March 16, 2020. I have to say I do not agree with the concept of open borders nor do I see it as a Christian obligation. Let me touch upon some elements of this article and why I disagree with its premises. The fact that I may disagree with anyone presents no difficulty for me and I am willing to talk about any points of view or disagreements with the desire to know and learn from the perceptions and opinions of all. For example, Mr. Schneider refers to Jesus’s own border crossings where he finds the inns have no rooms; flees with his parents to Egypt for safety from mass murder; and then wanders in Samaria where he treats the locals as fellow human beings. Mr. Schneider also refers to how St. Francis traversed the Mediterranean world crossing border lines to visit the camp of Sultan Malik, and how St. Benedict in his rule states all guests are welcome. Mr. Schneider favors open migrations across certainly more open borders.

I see Mr. Schneider’s point as a Christian but point out that to allow people to come to our country without vetting, examination, or controls is to invite in people none of us know anything about. They could be criminals and could be involved in sex trafficking. It is wearing rose-colored glasses to not see humanity as it is after the 6 genocides of the last 100 years. Recently, when two persons were not turned to the much- maligned ICE, a 92-year-old woman was murdered in NYC and a 5 year old assaulted in Chicago. Moreover, persons who come here illegally are making fools of our system when there are legal avenues to come here and our country is based on the rule and rules of law. Open borders invite and tell essentially criminals invitingly to come here and be welcome. These illegal entrants use our medical system, employment system, and our educational system for their own purposes and if we adopt the position of Mr. Schneider, these people will be permitted and encouraged to get away with it. These persons are not immigrants at all but are illegally here and have no standing and basis to be here at all. Their presence benefits corporate America with cheap benefits and low wage labor, but serve to take away jobs from legal immigrants who have worked and paid taxes and raised their families in the legal system they have chosen to enter and follow.

The concept of open borders is no basis for operating a society based on law, obeying the law, coming here and proceeding legally, and, most of all, open borders and illegal migration is a bald-faced attack on the concept and idea of citizenship and our Constitution. The President is the chief executive of a nation and is obliged to enforce the law. However laudable, the argument from compassion and love fails to deal with the realities of nationhood and operating a society where our citizens can obtain the help from the government and employment which they are first and foremost entitled to above all.

I do hope I have given reasons for my elements of disagreement with Mr. Schneider and point out to him the unpleasant facts that yes Jesus went to Egypt and what he said was true of St. Francis and the rule of Benedict; but at the present time there is a Christian genocide in the Middle East; the Coptic church is under attack; and Nigerian Christians are regularly being beheaded, killed, and tortured. I can only say I find Mr. Schneider’s arguments lacking strength and not seeing the world as it is. He writes for catholic Christians who, if they are Christians, know the deadly reality of sin that god had to resort to the radical remedy of the cross to rescue and save us from this awful inescapable truth of human nature, what it is, or at least what it is capable of.