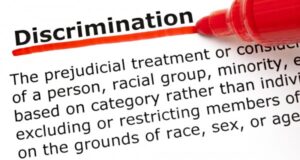 Dear Readers, thinkers, politically incorrect and the discerning and perceptive. In a previous essay I concluded that Title VII of the Unites States code, although it prohibited discrimination in the workplace based on the employee’s race, national origin, sex, or religion, did not prohibit discrimination in the workplace based on sexual orientation, whether homosexual or transgender.

The law in this regard appears to be set and clear that Title VII in this sense is solely a gender or sex discrimination statute insofar as it prohibits discrimination based on sex. Recently, however, there has been a spate, or rather developing line, of cases holding that if a gay or lesbian person is discriminated against because he or she is perceived not to conform to stereotypes how men and women are supposed to act and behave, this conduct may constitute sex discrimination under Title VII.

A recent case pointing to the way to this new rule is Higgins v. New Balance. In Higgins, a former employee brought an action against a former employer alleging retaliation and discrimination based on sex, sexual orientation, and disability, all in violation of Title VII; the Americans with disabilities Act; the Maine whistleblower’s protection act; and the Maine Human Rights Act. The United States District Court for the district of Maine entered summary judgment in favor of the former employer and the former employee appealed. The first circuit court affirmed part; and vacated in part; and remanded.

More specifically, the court held that the district court did not err in granting summary judgment in New Balance’s favor on the hostile work claim; the retaliation claim; and, also, the disability claim on the issue of the employer’s failure to accommodate. The court, however, in its analysis of the hostile work environment claim held that the statute is inclusive of sex discrimination in some sex harassment cases citing Oncale v. Sundowner Offshore Services, Inc., and the court went on to state that even in same sex harassment as well as more normative sex harassment cases, the plaintiff must prove that the conduct at issue in fact constituted discrimination because of sex.

The court, however, stated most explicitly that Title VII does not proscribe harassment because of sex orientation, citing Hopkins v. Baltimore Gas and Electric Company and Williamson v. AG Edwards and sons. The circuit court, however, considered the argument of the appellant who cited Price Waterhouse v. Hopkins where the appellant in that case was mocked by his peers by their speaking in high pitched voices and mimicking feminine movements. Price concluded that this was sexual harassment because the appellant had failed to meet his coworkers stereotyped standards of masculinity and so was harassed by reason of his sex.

The first circuit court, although it rejected this argument as not having been raised at the district court level, noted in a footnote that a plaintiff can ground a Title VII claim on evidence that other men discriminated against him because he did not meet stereotyped expectations of masculinity, albeit upholding summary judgment for the employer, where, as has been stated, the employer first raised this issue on appeal. It is clear that the Higgins court opened the door to the validity and viability of sexual stereotyping claims as sex discrimination within the ambit of Title VII.

Nichols v. Azteca Restaurant Enterprises took further and specified and amplified the dicta in Higgins. In Nichol, a male former employee sued a former employer for sexual harassment and retaliation alleging that he was harassed by male co- workers and a supervisor because he did not meet their view of a male stereotype. The U.S district court for the western district of Washington entered judgment for the employer and the former employee appealed.

The ninth circuit court of appeals considered the plaintiff’s claim of a hostile work environment and harassment based on sex. More specifically, the plaintiff claimed that he was a subject to a relentless campaign of insults; name calling; and vulgarities wherein male coworkers and a supervisor referred to Sanchez the plaintiff, in English and Spanish as ‘her’ and ‘she’, mocked Sanchez for walking like a woman and taunted him in English and Spanish as a ‘faggot’ and ‘fucking female whore’ based on the perception that he was effeminate, and therefore these events and actions occurred by reason of his sex and constituted discrimination and harassment based on his sex.

In short, the issue before the court was the plaintiff’s contention that he was harassed because he failed to confirm his behavior to a male stereotype. The court noted that the plaintiff’s argument was derived from the Price case in which the Supreme Court held that a woman who was denied partnership in an accounting firm because she did not match a sex stereotype had an automatic claim under Title VII. The fact in Price were that the plaintiff was described by various partners as much; in need of a course in charm school; a lady using foul language; and someone had labeled her a tough talking somewhat masculine hard hosed manager.

The Nichols court, citing Price, held that sex stereotyping applies with equal force to a man who is discriminated against for acting too femininely and that Price established a rule that barred discrimination on the basis of sex stereotyping and applied it to preclude harassment here. The court distinguished its decision in DeSantis v. Pacific Telephone and Telegraph Co., where the ninth circuit held that discrimination based on a stereotype that a man should have a virile rather than an effeminate appearance did not fall with the purview of Title VII as conflicting with the Supreme Court holding in Price and that for this reason DeSantis was no longer good law.

The Nichols court, applying the Price case, held that sex stereotyping applied with equal force to a man who is discriminated against for acting too femininely and that Price set a rule that barred discrimination on the basis of stereotyping. In sum, the ninth circuit concluded that sexual stereotyping, which occurs because of and by reason of sex, was and can be actionable under Title VII and a hostile work environment claim should a termination occur. A later case, Heller v. Columbia Edgewater Country Club, follows suit on this issue. In Heller, a lesbian employee’s allegation that she suffered sex or gender discrimination by reason of the actions of her former supervisor who allegedly harassed and ultimately discharged her because the employee did not conform to the supervisor’s notion of how a woman should behave was actionable under Title VII and that the protections of Title VII were not confined to heterosexual employee. The actions and acts at issue in Heller were that the supervisor ridiculed the plaintiff for wearing men’s shoes and with comments as, ‘I thought you were a man’ and ‘do you wear dick in the relationship?’ On this evidence, the defense motion for summary judgment was denied and the Title VII action was allowed to proceed on the basis that sexual stereotyping was considered to be sex discrimination.

Finally, in Centola v. Potter, the Massachusetts federal district court held that the plaintiff set forth a Title VII claim where the evidence showed the plaintiff showed the plaintiff’s coworkers taped pictures of Richard Simmons in pink hot pants to the plaintiff’s letter carrier cage; asked if he would be marching in the gay parade; asked if he had gotten AIDS yet; and placed cartoons mocking gay men at his cage. The court concluded these facts suggested discrimination based on sexual orientation. The Mass. court held that although discrimination based on sexual orientation is not allowed or included in Title VII, sexual stereotyping, so long as based on sex, is actionable under Title VII.

What rule or pattern in conclusion can be drawn from this brief review and analysis? It is clear that the federal courts are clear in interpreting Title VII as a prohibitive sex discrimination statute and applies it only to harassment and actions by reasons of sex and is not directed at least at this point although this may have changed to discrimination by reason of sexual orientation. The federal courts, however, are clearly moving to a view or position that where sexual stereotyping is a skewed perception of how man and women should behave this action is by reason of sex and is with the ambit of Title VII.

A rose by any other name should smell as sweet. Under Title VII, as understood in its legislative history, this statute was enacted and directed to prohibit, among others, discrimination in the workplace based on sex. It did not include or prohibit discrimination by reason of sexual orientation. But the courts have ruled that attacking someone’s sexuality, masculinity, or femininity, is to effectively to attack their sexual orientation. The federal courts have corrected and are correcting an injustice and wrong. Sexual discrimination and sexual stereotyping in truth skirt the issue when we all know it is gays or lesbians who are being attacked for their orientation and not their given bodies. Thus, this trend in the federal courts solves the problem at least temporarily and moves society forward.

One day soon, if not already, Title VII will and should be amended to prohibit discrimination based on sexual orientation or another bill will be passed or another case decided. A system and society that includes and does prohibit; that gives more than it takes; that offers chances and opportunities for the most people is the best for us all. The homosexual that discovers a cure for cancer but cannot work or is belittled and driven out of his job makes losers of us all.

This essay is taken with alternations and modifications from my book Select Legal Topics, pub. University Press of America, 2011, pp. 445-448; full case citations can be found on p. 459.