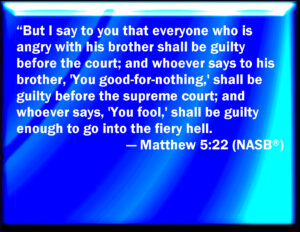 “A Commentary on and Interpretation of Matthew 5:21-22,” by Andrew J. Schatkin

Ladies and gentlemen, my dear thinkers, good friends, politically incorrect, and intellectually thoughtful, and you who wish to go beneath the surface and get to and at the truth. As promised, I am beginning a commentary and interpretation and analysis and seeking an understanding of the sayings of Jesus in the Gospels. The words of Jesus, and in fact every word of Jesus, deserves our full and commanding attention as coming and having its source in the mind of the eternal god in heaven.

Today we will look at and seek to analyze and interpret Matthew 5:21-22, where Jesus says, “You have heard that it was said to the men of old You shall not kill and whoever kills shall be liable to judgment. But I say to you that everyone who is angry with his brother shall be liable to judgment.” This is a saying that I think most difficult to grasp and understand. Jesus seems to be shifting our understanding of what constitutes murder from the act of murder and its traditional interpretation as inadequate and lacking depth of understanding to the emotional prelude to murder of anger, and thus, in shifting the ground from the act of killing to its source in this interiorization, he gets at the root of the moral issue, and of the problem and of the sin. Jesus, I think, is not suggesting we not have emotions, but we should not act them out in rage or killing or any other forms of violence, even nonphysical violence, such as yelling or berating.

This is, however, a most hard saying since Jesus tells us and commands us that anger is the same as killing. There can be no more radical command and saying than this, but we must understand what I have said previously in interpreting this saying as directing us at the root cause of the sin of murder and killing and certainly he definitely tells us not to act on this emotion of anger to kill and murder, but he surely says here that anger is to be equated with murder and killing. There is no way other than to understand this as raising the moral bar to an impossible height and standard. We all at times exhibit and become angry. This is our human nature. How then can we follow this nearly impossible moral rule? I think Jesus is telling us here that this is something we are told we are to attain, if possible. It is moral perfection and is a guide and height of morality which he is telling us we should aim for. Perhaps we can only understand this saying and command of Christ that we can only obey this command with the help of the grace and love of Christ and the Holy Spirit.

This ends, my dear friends and thinkers, my interpretation of this saying of Christ and I do hope that Christians and non-Christians alike will read, maybe learn, and most important, go back to the biblical text and revelation in Matthew Chapter 5, verses 21-22.