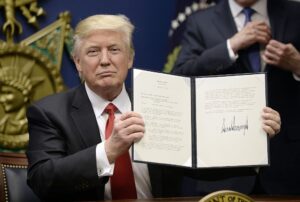 “A Few More Comments on the President’s Recent Executive Orders on the Matter of Immigration,” by Andrew J. Schatkin

In a previous essay, I examined and analyzed several of President Trump’s Executive Orders on immigration and responded to the left criticism of those orders. The orders analyzed were, 1. the Trump administration’s suspension of enrollment in global entry for New Yorkers; 2. the Trump administration’s travel ban from six new countries including Nigeria, Eritrea, Myanmar, and Kyrgyzstan, and making citizens from Sudan and Tanzania ineligible for the diversity visa; 3. I also analyzed the cogent reasons for the Trump administration’s issue of allowing women to enter this country to give birth and thereby by an obvious act of manipulation obtain citizenship for their baby; 4. I addressed the matter of sanctuary cities, and the fact that their shielding illegal aliens’ protection from the reach of the federal government and so protecting from deportation.

I would now like to address several other of the president’s executive orders attacked as anti-immigrant and for religious and racial prejudice grounds. First, Section 4 of the border security executive order directs DHS to construct wall on the length of the US-Mexican border. The order also directs 5,000 additional border patrol agents as soon as practicable. The left says the wall in ineffective in deterring illegal immigration among other reasons. It is quite obvious that the wall and the added agents are completely necessary. Our country is flooded with millions of persons illegally present and undocumented. All are unknown quantities and a potential danger to us all. Every day, persons slip across illegally, often with the claim of asylum in order to stay. The President is correctly addressing a constant and ongoing problem that is not going way but is worsening unless attended to in the fashion and with the steps the president is taking. We cannot as a nation state have a society where millions of unknown and unidentified persons walk and drive about with free rein. This is a great danger if allowed to continue and is correctly being stopped in part with this wall and with the border agents guarding the border and not allowing illegal entry.

Section 5 directs DHS to construct detention facilities at the southern border and to assign asylum officers and immigration judges to the facilities to conduct asylum interviews and hearings, and to detain noncitizens to the extent permitted by law. The left says women and children will be detained. I respond that the president by this order wishes to expedite the entire matter of illegal entrance and asylum. We are flooded with illegal entrants and persons crossing the border and then claiming asylum once here despite coming here illegally. These asylum claims are likely bogus and the matter of illegal entry and the claim of asylum by this method is being handled and addresses in a quick and legal matter. These claims of the right to be here and asylum should be done through the legal avenues, not by coming here illegally and then saying asylum should be read to let us stay. It is more help to these immigrants that their claims and cases are being addressed quickly and efficiently rather than by some sort of long drawn our process. The left claims women and children are being detained. Women and children are being brought here illegally, essentially as pawns of manipulations, and the left says having been pushed across the border illegally they should not be detained. What, my friends, would you have the authorities and the government do when face with this?

Section 5 expands the list of noncitizens subject to deportation of anyone charged with a criminal offense who committed acts that constitute a criminal offense who engaged in fraud or willful misrepresentation or who has abused any program related to public benefits or who is subject of a final order of removal but has not been deported or who otherwise poses a risk to public safety. Though broad, the president addresses persons in defiance of our system of law and essentially seeks deportation of persons guilty of a criminal offense who are noncitizens. Should we allow illegals to commit criminal offenses and remain, and allow those who engage in fraud who are illegally here to remain? Should we allow those noncitizens who have abused programs related to public benefits to remain? The president says these noncitizens who commit these acts should not be allowed to continue on. He is in fact attending to his due as our chief executive and to make it a priority to depose of persons illegally here and guilty of these offenses. Should criminals and law violators and the categories of persons he lists not be deported?

Section 7 authorizes an increase of 20,000 ICE agents. The left says this is likely in anticipation of the launching of more aggressive law enforcement activity, including raids which spread fear in immigrant communities. The left misses the point. These persons are illegally here and the argument that these this increase in agents of ice will spread fear in immigrant communities is absurd. These are not immigrants but persons here in violation of the law who have no right to be here in the first instance. The concern of the left here is frankly bogus and misleading, confusing the word ‘immigrants’ with those who are here illegally when in fact they are not the same.

The president suspends the issuance of visas to nationals from Iran, Iraq, Sudan, Syria, Libya, Somalia, and Yemen; shuts down the refugee program for 120 days; reduces the number of refugees to be admitted to the U.S.; halts the resettlement of Syrian refugees; indefinitely launches a screening mechanism for the entry of foreign nationals; and requires DHS to expedite completion of an entry-exit tracking system.

Section 3 of the order suspends the issuance of visas to people for 90 days of countries designated as detrimental to the interests of the U.S. including Iran, Iraq, Sudan, Syria, Libya, Somalia, and Yemen. Section 4 requires uniform screening standards for all immigration programs to include such assessments such as whether an individual is a risk and will make a positive contribution.

The left says this is a religious prejudice Muslim ban. It is true that these countries have Muslim majority population bases but many of the most populous Muslim countries are excluded such as Egypt and Indonesia and Pakistan. These facts belie and defeat the left’s arguments in this respect In addition, there have been continued and constant Islamic fundamentalist attacks in many of parts of the world, most recently in the U.K. where released terrorists have murdered British citizens and the U.K. is considering holding these prisoners convicted of terrorist offenses for a longer time then when they are permitted release. The Nigerian Christian community has been murdered by Islamic militants. I add here that our Muslim brothers and sisters are mostly law-abiding and honest citizens and this violence is only on the part of small minority. The president’s order is not an order based on religious prejudice but is based on a realistic assessment of the facts and circumstances of terrorism and the adherents of Islamic radical fundamentalism that is not going away. We cannot in the name of political correctness ignore what stares us in the face and cannot simply walkover the graves of the martyrs who have suffered and died and continue to do so. We cannot allow our country to give free access to unvetted foreign nationals whose societies have been proven themselves unable to control this problem, nor can we allow ourselves to be politically driven to permit to happen what the president is correctly seeking to prevent, which is his duty and what he was elected for: to attend to the interests of our country regardless of the political fallout and consequences.