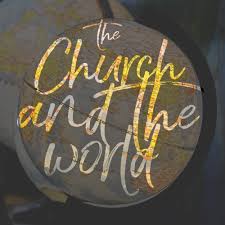 “The Church and the World,” by Andrew J. Schatkin

My dear readers and friends, I would like to talk about and present to you the issue of the church and the world. The United States is a system of democratic political equality where every opinion is entitled to be heard. The church is not quite so and the idea of political equality and a House of Representatives, Senate, the States and the Presidency cannot be imported into the church. The church says Jesus is Lord, and that he rose from the dead and offers through faith salvation, eternal life, and the eternal joy of life in heaven with the saints. The world is largely indifferent to these claims or more precisely denies them as factors.

There is, however, a problem in the interaction and clash of the church and the world and at times subtly and incorrectly the secular society and its ideas and thinking moves into, and affects, the church.

Let me give you some examples. There is the matter of gay marriage, homosexuality, and transgenderism. I detest any sort of discrimination or prejudice directed to the gay/homosexual community, as well as hate or prejudice directed to our transgender brothers and sisters in Christ. As a Christian, I have only love for our homosexual brothers and sisters and my transgender brothers and sisters who I fully know Jesus died for as he did for all of us. I have, however, a concern that some churches (Methodist, Episcopal and UCC) have endorsed gay marriage and gay pastors. I regard the view of these churches nothing more than giving in to the incursion of the thinking and positions taken by secular society on these matters. For some 2,000 years, the church has been guided on these matters by the biblical revelation and this cannot be evaded or escaped in the name of adopting some sort of liberal progressive secularism which has crept into the church and wrongly I think affected what should be the correct position on these issues.

Let us take a look at some biblical passages on these developments both in the secular civil society and in the church. Leviticus 18:22 condemns homosexual behavior as does the story of Sodom and Gomorrah in Genesis 19; Matthew 19 mandates heterosexual marriage as the only option. The book of 1 Kings condemns male cult prostitution, specifically 1 Kings 14:24;1 5:12; and 22:46. Critical mention of homosexuality and Sodom and Gomorrah is mentioned by the prophets Isaiah and Jeremiah in Isa 1:9, 1:10, and 13:19. Jeremiah says the same in Jer 23:14; 49:18; and 50:40. See also on this matter Zeph 2:9; Lam 4:6; and Amos 4:11. They all speak of Sodom and Gomorrah. Jesus speaks of Sodom and Gomorrah in passing in Matt 10:15, 11:23, and in Luke 10:12. I note that Jesus rarely spoke of or condemned homosexual behavior since he was Jewish and speaking to a Jewish audience in Palestine where this behavior was not an issue, and in the gospel passage I referred to here Jesus said it would be worse for the persons he referred to than to Sodom and Gomorrah.

On the other hand, since St. Paul was addressing a Greek audience where homosexuality was present on a somewhat widespread basis, he did condemn this activity without reservation. See Romans 1:24-27 and I Cor 6:10 and 15-20. Also see 1 Tim 1:10. On this also see Jude 7 and 2 and Pet 2:6.

It is quite clear that homosexuality and gay marriage within the Christian system of thinking is seen as sin and subject to serious criticism if not condemnation. That most ancient of churches, the Roman Catholic Church in its Catechism states that homosexual conduct is an act of grave depravity and intrinsically disordered.

I conclude here first that the position of the church on this issue cannot blow with the faddish winds of the secular society which moves in some sort of politically correct and political direction that the media and politics promotes and endorses. The church on this or any other theological or moral issue cannot blow with the winds and I take the view that sacred scripture if it is to move must move with biblically-revealed truth. I take what I say here is one example of the secular society and its politics moving into the church and its doctrines which is happening in these instances and continues to do so. In short, the church is not and never will allow the world of adultery and casual sexual liaisons, but must preserve its god-revealed and god-given role to preserve and promulgate the true faith and its moral rules and values for coming generations who will have and will need this truth and this revelation for all times and generations. I add that the argument must move with the times a completely false and bogus statement. I prefer to consult on moral issues St. Augustine and Origen and not some sort of politically- convenient fad or movement.