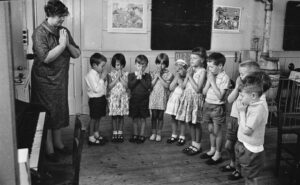 “Should Prayer in our Schools be Permitted?” by Andrew J. Schatkin

First, let me briefly review a blog or essay about having or rather reinstating Bible reading in our schools, elementary and secondary. I argued the good of Bible reading in our schools on a number of bases. I stated that much of our literary tradition stems from the biblical text and its beautiful cadences. I referred you to the poet John Donne and the author of many sermons; John Milton the author of Paradise Lost and Paradise Regained; and John Bunyan, the author of Pilgrim’s Progress, a great allegory. All these writers and many others were totally conversant with the biblical text, particularly the King James version of the Holy Scriptures. I noted and emphasized the great literary value of the Bible for all generations. I also noted the thought expressed in the Bible in the Psalms, Hebrew Prophets, and the sayings of Christ will be of great help and intellectual assistance to our young people with its continuous message aiding the poor and economically deprived. In a society that tells us all the materialism and greed are the answer, the Bible says otherwise and this message and its truth should be made available to the younger generations to come. Finally, I argued that Bible reading was taken from our school system on the ground of the establishment clause of the U.S. Constitution. Bible reading was part of our school system for many hundreds of years and the issue of the violation of church and state and the violation of the establishment clause was never raised until recently. The establishment clause was directed to the funding and establishment of a state church in the fashion and mode of the Anglican Church in the US and at one time the establishment of a state-supported Anglican church in Virginia and New York and the Congregational Church in Massachusetts. It is quite clear that this was the purpose of the establishment clause.

Moreover, the Declaration of Independence mentions God four times; our coins contain the words “In God We Trust”; and in 1941 President Franklin Roosevelt proclaimed the last week of November to be a week of Thanksgiving and National Bible Week, and in 2017 this was supported by the U.S. Conference of Catholic Bishops and the National Bible Association.

Given what I have set forth, there is little or no doubt that the Bible, far from in violation of the establishment clause, not only is not but the Bible and the mention and acknowledgment of the Bible and God is fully part of the American system and these facts cannot be evaded.

Let me now analyze the issue of prayers in our school system. Prayer was a fixed and essential part of our secondary school system for many hundreds of years and only recently was it challenged by an atheist who was successful in a lawsuit on the issue before the U.S. Supreme. I have no issue with atheism and the right to be so or follow any path of faith one may wish, whether Judaism; Islam; Hinduism; Shintoism; or Sikhism. I do not think that prayer violates the establishment clause which I think I rightly maintain was directed to the establishment of a state church on the Anglican model funded by state tax monies. At one time, there were in NY, MA and VA state churches which were disbanded. As proof that prayer is was not a violation of the establishment clause is the annual national prayer breakfast hosted by the U.S. Congress, with 3,500 guests and attended by representatives of 100 countries, held in the Hilton International ballroom. As I stated previously, the Declaration of Independence mentions God four times and the Senate and House of Representatives regularly open with a prayer. The argument that prayer is a constitutional violation falls quite flat. I have the complete works of Abraham Lincoln where he frequently makes reference to God and to this Christian country. What is the left with in light of what I have just said and the presence of the words “In God We Trust” on all our coins and currency?

Finally, I make this argument for prayers. Our society is totally built on money, greed, materialism, and fashion and fad. We see mass shootings everywhere all the time. Clearly, our system is broken and lame, based on sex education and handing out condoms as a solution. Prayer need not be directed to a personal or any God. It is, however, a recognition that there is more to life than guns, gold, and girls. We wonder at the coldness, hardness, loneliness, and isolation of our society and so set about to castrate the geldings and bid them be to fruitful. We live in separated little boxes based on social media, cell phones, text messages, and emails and say there is no life beyond ourselves and fulfilling our material needs. At present, society is ignoring the bible, prayer, and the entire legacy of Christian thought for the last 2,000 years—whether St. Augustine, St. Thomas Aquinas, Milton, or Dante—and substituting the latest work of fiction or the hottest video game. I ask my ideological liberal friends and colleagues who, I dearly love and respect, to reconsider their intellectual position on the above-mentioned issues.