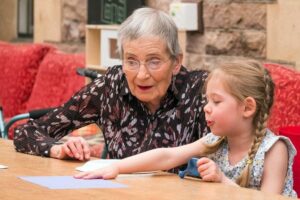 “The Old are not to be Discarded,” by Andrew J. Schatkin

We live in a time where youth is worshiped. Those who choose to view sitcoms in the evening or soap operas in the afternoon on the networks rarely, if ever, see a man or woman over thirty. All are or seem to be laughing, joking, and frolicking, personifying the would be desideratum of the teenager who has and never will grow to maturity and old age. Whether it is the detectives on CSI or the antics of the Kardashians, American society through it all is devoted to the young, pretty women and young macho males.

The old on the media and stage are, if not discarded, or even invisible, then the butt of humor, out of it, and not with it, offering no knowledge and wisdom and, for the most part, leaning in their slightly occasional comic parental role. It is the scandal of private industry that no one under fifty is permitted to serve. The Golden Door of early retirement is if not pressured then gently forced on the middle-aged worker to the point of termination and firing.

True life as we know it is most surely a continuum. The child, adolescent, or young adult just graduated from the university and about to embark on the journey of life is the tabula rasa filled with some few facts, often sadly, solely connected with computer operation but bereft of the experience in life and letters that fully forms and informs the mature mind. As we grow old, though, our bodily machine may come to wear, but our minds and souls and hearts grow up and away beyond the naiveté of youth. In short, the true intellect is finally formed and continues to flourish beyond academic content; as life continues sifting and absorbing, the increasing knowledge and wisdom life offers us all.

In the journey we call life, through middle age and, finally, old age itself, we grow and develop and dream further and create further and more completely. Though our bodies decay, our souls expand not merely in ourselves but beyond the egotism of youth to the interconnection and interdependence of old age.

Other societies fail to share our fear and aversion of old age but see the old as a resource a repository of wisdom, knowledge, and experience. The Mediterranean societies of Italy and Greece link the old with the young and the middle aged in three-tiered households, allowing the three generations to learn and absorb one from the other; the Chinese do likewise. It is the way of civilized man not to reject the old, not to warehouse them, lest they be seen to offend us by their physical slowness and disability but to honor and respect them. It is only the very young, in their colossal egotism, that know all, and think they have seen all. It is the old, in their compassion and tolerance, that know how little they know and how much they have yet to understand.

Verdi wrote his greatest operas in his old age. Milton wrote his greatest narrative poems and plays, Paradise Lost, Paradise Regained, and Samson Agonistes, in his blindness and infirmity.
Thomas Hobbes, one the greatest English philosophers, began his career with a translation of Thucydides from the Greek. He ended it with a translation of Homer’s Odyssey at the age of ninety. Kant produced his greatest philosophic treatises after the age of fifty. The Bible also teaches us to honor the widow and sick.

To reject the continuum of life is not only to reject fully developed thought and art stemming from the melding of education and experience that is the success of age, but to reject the reality of life itself. At whatever stage of life, we are on a continuing journey. No one would wish to be eternally young limited in our outlook to reveling on the beach in bikinis and briefs playing radios that speak only of young love and not compassion and charity. We all face the prospect not to be feared or derided but cherished for going beyond the emptiness of youth to the wisdom, calm, and love of old age. It is the way of life that though our bodies wither with the ravage of time, our hearts, souls, and minds continue to grow knowing ourselves more fully and knowing others more completely.

Each day, we stand at the gates of death itself. In that sense, we are all growing older each passing day, growing not to be slow and dull, but attaining to relationship with the reins is life itself, and growing more fully human and humane. For what makes us fully human is not out youth, our chests, or our breasts, but our continuing capacity to grow in intimacy and interrelationship. To reject the old is to reject the truth of life itself; it is to reject what finally and completely makes us human beyond erotic love and material success to the intertwining of ourselves with each other and ultimately with the Creator.

This essay is taken, with alternations and modifications, from my book “Essays on the Christian Worldview,” pub. by Hamilton Books, pp., 108-109, 2011.