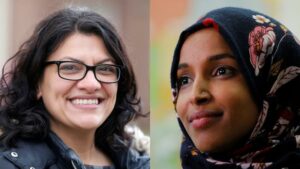 “A Comment on Ilhan Omar’s and Rashida Tlaib’s Planned trip to Israel,” by Andrew J. Schatkin

I would like to comment on these two esteemed members of the House of Representatives and their planned trip to Israel and my response to the left’s criticism of the President with respect to his preventing and blocking this trip, along with the Israeli Prime Minister.

Let me take a look at all the facts. These two American representatives shunned a bipartisan delegation to go to Israel and decided to go on an independent trip sponsored by anti-Semites. The Washington Post described the trip planned by Miftah, a nonprofit organization headed by a Palestinian peace negotiator Hanan Ashrwazi. The New York Times identified the group as promoting global awareness and knowledge of Palestinian realities. The website of Miftah reveals otherwise of the true realities of this evil. This group posted an article that accused Jews of using the blood of Christians in the Jewish Passover. This group also published an American neo-Nazi treatise called “Who Rules America?” Vox’s Jane Coaston explained the original source was the National Vanguard, a neo-Nazi group founded in 2005 in Charlottesville by members of the National Alliance, a white nationalist group. This group celebrates terrorists, including an evil woman who helped murder 13 Israeli children. Miftah celebrates the terrorist Al Mughrabi and describes the female suicide bomber Wafa Idris as the beginning of a string of Palestinian women dedicated to sacrificing their lives for a cause and singles out for recognition Hanadi Jaradat, a womwn who blew herself in a restaurant killing 21 people including four children. The founder of Miftah, Ms. Ashrawi, excused jihadist violence saying you cannot adopt the language of the occupier by describing anyone who resists with the term terrorist.

It is clear that it is a scandal and disgrace when members of our Congress collaborate with anti-Semites on their own personal tour. We see attacks on the President and the prime minister of Israel by elements knowing the plain truth of members of Congress partnering with anti-Semites and obvious terrorists on a so-called visit and tour to Israel.

This article is largely taken from an article published by the national review and written by David French. I only say The New York Times and The Washington Post, as responsible journalists, should be interested in the full facts rather finding their way always to attack President Trump who has acted correctly in properly defining these congressional representatives. Let me add as a Christian I have no hostility to our Muslim brothers and sisters and harbor no feelings of discrimination or prejudice but I have an interest and respect to the facts, for the truth and, most of all, for intellectual honesty.
To all my Muslim and Jewish Americans I offer the undying and eternal love of Jesus without race, national origin, or sex distinction. He laid down his for all humanity, with no distinction of class or economic status.