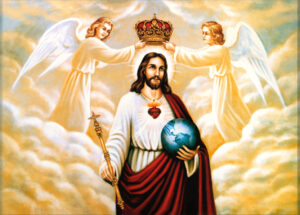 “A Word on Kingship,” by Andrew J. Schatkin

In First Chronicles, chapter 14 verse 2, it is said that David was established by the Lord as King of Israel and that his kingdom was exalted highly. In First Chronicles chapter 17 verse 11, again it is said that the Jewish Kingdom will be established. In the book of Esther, chapter 1 verse 4, the King Ashasuerus is represented as showing the riches of his royal glory and splendor and pomp of his majesty for many days, 180 in all.

In Psalm 15 verse 11, the Psalmist says that saints shall speak of the glory of his kingdom and tell of his power and goes on to say in verse 12 in that same psalm that it will be made known to the sons of men the mighty deeds and the glorious splendor of the Lord’s kingdom, described in verse 13 as an everlasting kingdom.

In the Hebrew bible, the notion of kingship and having a kingdom is connected with riches, glory, and power. On the other hand, Jesus, in the New Testament, presents a different view of kingship and having a kingdom. In Matthew, chapter 21, Jesus is presented as a King nearing Jerusalem but comes with humility and mounted on a donkey. The crowd surrounds Jesus who appears in what may be described as hardly the appearance of a King but, nevertheless, the crowds and onlookers spread their garments before him on the road and cut branches from the trees and spread them on the road. In Mark, chapter 11, again Jesus appears before the crowd as he nears Jerusalem on a donkey. In Luke, chapter 19, again Jesus comes in humility to Jerusalem and nevertheless he is proclaimed as a king.

What conclusion can we draw from this comparison? Kingship is presented one way in the Old Testament. However, in the New Testament, Jesus is represented as he nears Jerusalem in his humble garments, perhaps seen today as somewhat shoddy riding on donkey. It is is obvious and well-known that the Hebrew bible presents many instances and sayings about helping the poor and the widows who suffered in that society. Nevertheless, it may be said that the idea of a king in the Hebrew Bible differs in its presentation of Kingship that Jesus presents to the world in the New Testament. Jesus says to the world that being a king is to come in humility and service.

For the world at that time, and this time too, it is having power, riches, and importance. For the Christians, being a king is humility and using power and riches in the service of others. Perhaps it was Jesus’s presentation of kingship that the Pharisees and Jewish hierarchy of that day could not accept or even understand.

The world will always reject the Son of God whose kingdom is not material wealth and power but service, love and humility. The forces of the world may reject the kingdom of Jesus but it remains to be seen whose kingdom will be established and whose will not. Many kings and dictators have risen and fallen. Their reign and power were temporary. The Kingship of Jesus, founded on humility and service, despite attempts to disestablish it, nevertheless, for some 2,000 years, has attracted adherents both rich and poor, educated and uneducated. It remains to be seen where the truth will be found and who will find it and who will be King and reign and who will not.

This essay is taken from my book with alterations and modifications chapter 6 of “Essays on Faith, Culture, Politics and Philosophy,” pp.17-18 pub by the University Press of America.