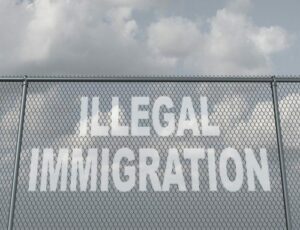 “President Trump is CORRECT on Immigration Policy: So-Called ‘Undocumented’ Immigrants are In Fact Violating the Law,” by Andrew J. Schatkin

I would like to make some comments on matters of current interest in the news. When I make these comments, I do not make them with a right or left agenda, but as a Christian because I follow, to the extent I understand or am able to, the biblical revelation and the words and life of Christ. So I have no hatred or animosity to Islam or anyone but do know that Christ laid down his life for all humanity and offers his love to all as well as eternal life. More to the point, I share with the left a great concern for the poor and poverty-stricken and those in material need knowing the affirmative and unequivocal words of Christ that the poor and poor in spirit are pronounced blessed and that he chose as the agents of his grace fishermen and a tax collector.

I would like. However, to comment on an article in a local Queens newspaper, The Queens Courier, of July 4, 2019 entitled “Queens Village Mom Remains in ICE Limbo.” This article talks about how a pregnant mother of two is being detained in Louisiana pending her detention hearing in the U.S. District Court for the southern district. Rep. Cortez says Ms. Santiago has been denied proper medical care. Ms. Santiago was arrested in April by ICE agents while appearing in the Queens County family court in Jamaica for a custody hearing. An immigration judge ordered Ms. Santiago deported when she failed to appear for immigration court proceedings.

This article presents Ms. Santiago as a figure deserving sympathy. The facts are that both Ms. Santiago, her children, and her child soon-to-be in this world, are here in gross and exact violation of the law, as are her entire family. The article paints ICE as evil and cruel, when the reality is that Ms. Santiago is in defiance of our legal system and essentially and effectively manipulating us. The article attempts to convince us that she and others like her deserve empathy and sympathy when in fact they deserve nothing. It is noteworthy that by bringing her children here and getting pregnant she again seeks to pull at our heartstrings in a false and bogus attempt to hide the truth of what is occurring. Perhaps the Queens Courier should reserve its sympathy and concern for the dead and wounded murdered by ISIS and the Taliban in the Middle East, Syria, and Afghanistan who return dead in their coffins. Perhaps Ms. Cortez should give thought to my last sentence and thought and understand that the illegal deserve legal defense but not empathy for their illegal actions.

I would also like to comment on an article by Bill Parry in the Bayside Times of July 19-25 of 2019, “New York Leaders Rail against HUD Proposal to Cut Housing Assistance for Mixed-Status Immigrant Families.” The rule is said to be directed at undocumented immigrants residing with their legal family members in public housing. Again, the issue is about illegal (not “undocumented”) immigrants who are in violation of the law. Housing assistance is not for the illegal and those who bring their children to reside illegally in federally-subsidized housing. If parents wish to bring their children here illegally, they are not in position to demand some sort of federal subsidy, a program and policy I have my doubts about. We live in country governed by the rule of law and not by false political hype disguised as purported compassion and love.

These two articles I have spoken of and analyzed reveal, I think, that the object of these articles and of the left is to eliminate the concept of citizenship and replace it with the idea that coming here illegally and getting residence is enough to make you a citizen without gaining citizenship by the legal means fully available. Getting your foot here, whether legally or illegally, is quite enough for the left, and makes mockery and fools of our hard-working and honest citizens who choose to come here legally, operate within the rule of law, and obey the rules.

Let me make another comment on some recent reports and journalism. In the Published Reporter of June 14, 2019, it was reported that labor leaders are urging the New York State Senate to take action on a bill to allow all state residents to get drivers licenses regardless of immigration status. The State Assembly passed this bill. It is argued that the bill would give thousands if people in New York the ability to get and keep jobs. The bill and its proponents miss the point and argue falsely. One illegally here has no right to a license or anything of that character and certainly have no right to employment of any kind. And their families, here illegally, also have no rights. It is the legal residents who have obeyed the rules who deserve the help such as licenses provide and who need that sort of help to support their families who are legally here. The issue, again, is not immigrant workers being given licenses but whether those who come here and reside here illegally deserve licenses and jobs the right of the legal who in fact are desperately in need of that help and consideration. Again, the left makes residence sufficient to gain the actual right and treatment of legal citizenship a hard path trod by the many people who have come here legally and who, by obeying the law and the rules, have built this great country to what it presently is.

In sum, the policies and examples I have just given and the analysis I have made leads to the inevitable conclusion that the left, if they can, wish to erode if not eliminate the concept of legal citizenship and to substitute residency, legal or illegal. The ultimate goal is getting more illegals the right to vote and participate in our system as “citizens” without actually being so. The object is winning elections and regaining power.