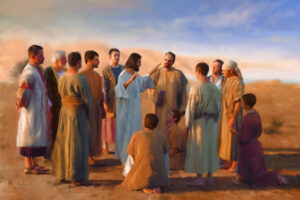 “Who were the Disciples?” by Andrew J. Schatkin

I would like to talk about there the matter and subject of who Jesus’s disciples were. For me, this is a very important and pressing subject since everything Jesus said or did has great and eternal significance.

This essay will concern itself with talking about the disciples of Jesus and a little bit about Jesus. The first thing that must be said is that apart from being an itinerant preacher and healer and worker of miracles, Jesus was a carpenter. Thus in the 13th chapter of Matthew in the 54th and 55th verses, certain individuals are repressed as saying of Jesus, “where did this man get this wisdom and these mighty works?” Clearly the contemporaries of Jesus were quite astounded that a carpenter could be so wise and piercing an intellectual.

Let me take this a little further. In the Gospel of Matthew, the fourth chapter, verses 18-22, Jesus is represented as asking Simon Peter and his brother Andrew, who were fishermen, to follow him and he says to them that he will make them fishers of men. Further, in verse 20 Simon Peter and Andrew are said to have left their nets and followed Christ. And then in verse 21, when Jesus sees two other brothers, James, the son of Zebedee and John, his brother, in the boat mending their nets, he calls them to be his disciples. Clearly Jesus was a working man and was choosing working men as his disciples, in this case four fishermen: Peter, Andrew, James and John.

Similarly in the Gospel of Luke, chapter five, verses 8-10, Jesus is represented as calling as his disciples Simon Peter, Andrew, James, and John, all fishermen. In the fifth chapter of Matthew, verse 27, Jesus calls as his disciple Matthew of Levi, the tax collector. Again, in the Gospel of John, the first chapter, Andrew and Simon Peter, are called as Jesus’s disciples by him.

However one may view Jesus, whether as the Son of God, or merely a great religious and ethical leader who founded a religion that has endured to this day and gains converts on a daily basis throughout the world, it is somewhat puzzling that he himself chose to reveal himself as a working man, that is to say, a carpenter, and that he chose as his followers, if not friends, workingmen, fisherman, and a tax collector, the last one of which was, in that society, despised as unworthy and an agent of the Roman Emperor. One may wonder why this compelling personality and great intellect chose to reveal himself and comes to us as a working man and chose as his followers and friends workingmen.

As I have indicated in this little essay, Jesus’s educated contemporaries were puzzled if not astounded that he could consort with these kinds of people. The present day world in its present manifestation emphasizes money as the indication of success and class status as the desiderata obtained by the accumulation of wealth. Although working people are not openly viewed with contempt, I would speculate that those of wealth and “class” do in fact despise working people as somewhat beneath them. Jesus had the great wisdom and insight to realize that working class people are quite as intelligent and prescient as educated people or wealthy people. One may only conclude that Jesus thought that working people were quite as worthy and intelligent as the wealthy and educated.

Finally, I would add one little thought here. Jesus chose as the agents of his gospel, grace, love and mercy, working people. One may safely conclude that Jesus’s message will therefore always have a greater appeal to the underclass who suffer than to the upper class who prosper. Jesus had the great intellect and psychological insight to realize that the gospel message falls much more aptly on the working people than on the privileged.
In short, the Son of God chose fishermen and a tax collectors as the bearer of his message of love and grace. For every atheist and secular person, there are ten thousand poor Hispanics crowding a Pentecostal church; the proof of the pudding is in the eating.

I say to my secular friends, doubters, atheists, agnostics, materialists, and all those totally indifferent to the church and to Christ and his message: take a look at the events I have just described and the life, words, and actions of this man Jesus. Take second look, rethink, and reconsider.

This essay is taken with alterations, additions, and modifications, from my book “Essays on the Christian Worldview and Others Political, Literary and Philosophical,” published by Hamilton books, Chapter 28, entitled “Who were the Disciples?” pp. 67-69.