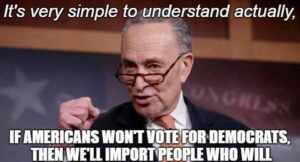 “The Desperation of the Democratic Party,” by Andrew J. Schatkin

In the year 2016 Donald Trump was elected the President of the United States defeating Hilary
Clinton. The defeat of Hilary Clinton was a great shock to the liberal left, the Democratic Party, the globalists, and the left ideology. The defeat of Mrs. Clinton was totally unexpected. It had been predicted by the organs of the left that Mrs. Clinton’s victory was inevitable. There and then began a constant attack on President Trump in many ways and on many fronts. The first attack was to account for the defeat of Mrs. Clinton by Donald Trump by saying that Donald Trump was elected by the votes of rural America; uneducated Americans with an eighth grade or high school education; and out of work and unemployed rust belt factory workers. Thus the left accounted for the election of Donald Trump by a method of slander, saying these were the “deplorables” referred to by Mrs. Clinton. Since Donald Trump received over sixty million votes nationwide, what I have just referred to were lies and slanders seeking to convince the people of this country that Donald Trump was only elected by stupid, uneducated, and unsophisticated voters. Since the ballot was and is a secret ballot, there is no factual foundation for what are essentially slanders and untruths.

Second, the left and the Democratic Party began and unending series of statements that the President was a racist. This was based on his policy addressing immigrants unlawfully present in the United States, usually coming here by crossing the borders illegally and then claiming asylum. It is noteworthy that there are legal methods to obtain citizenship in the United States and obtain asylum. It is a complete fabrication to connect race with the matter of illegal immigration and is an appeal to African Americans and Latinos who in the past were subject of race discrimination; and, so, doing so incorrectly connects these feelings as a result of past injustices with what is otherwise a legal and legitimate immigration policy.

And then, the President sought to put in place a travel ban from certain Muslim countries, and not the largest such as Indonesia, Egypt, and Nigeria. Again, the left stated repeatedly that this was religious and race discrimination, ignoring the reality that the United States and many other countries had been subject to terrorist attacks for many years emanating from a cultural and religious jihadist minority in those societies and countries. I would note that the President, far from being racist, has brought jobs and employment to our African and Latino brothers and sisters; in seeking to control illegal immigration has aided African Americans and Latinos in having access to jobs otherwise taken from them by cheap, no benefits illegal immigrant labor. Moreover, President Trump for many years operated a billion dollar business in NYC, the most diverse city in the world; he had many black, Latino, Asian and gay employees and so the likelihood of Donald Trump being racist was and is not great.

Most recently, Governor Brown in California has issued licenses to illegal residents, thereby enabling them to vote. Again, this is not only a completely illegal act but a way of gaining votes to win elections. At the time of Donald Trump’s election in 2016, most state legislatures, most state governors, and the entire national government, both the House of Representatives and the
Senate, were in the hands of the Republicans and only recently did the Democrats gain control of the House of Representatives. Governor Cuomo of New York proposes to issue licenses to illegal immigrants as well as giving scholarship and financial aid to the children of illegal immigrants. Again, this is an attempt to grants illegal immigrants the means to vote. These measures from the governors of the great states of New York and California are desperate modes and measures to regain power by passing the requirement of citizenship to be able to vote. In addition, a number of states have passed measures granting voting rights to felons. Once an attempt to win elections through the back door when the proper way for any party to compete in our electoral process is by and through the votes of tax-paying citizens.

The Democratic Party has suggested a policy of open borders. This is nothing more than allowing entrance on as massive basis of illegal immigrants. Again, it is a mechanism of securing a large illegal voting bloc that has no business participating in our democratic process. In fact, it is nothing more than a legal outrage to endorse any person here the right to vote which is a privilege of those who have gone through the legal process of entering this country and are legally here.

In addition, there has been a suggestion that, having lost the most recent national election by a majority of the Electoral College, that the institution itself should be abolished. The reasons for the Electoral College are still mostly valid. The concern of the founders in establishing the Electoral College was, first, that direct election by the people, if permitted, could result in a degree of possible manipulation. That reason is still valid. The media and political parties can through slogans and word repetition and, if you will, sound bites, fool people into believing things that are nothing more than lies and slander. Witness the use of the word “race” as a trigger word, and also the use of the word “rights” and, possibly, “sex discrimination” when connected with the President’s pro-life position. I would note that the President’s pro-life position seeks to preserve the lives of poor black and Latino children whose lives would otherwise be refuse.

Finally, there is a movement of reduce the voting age. Once again, a way of gaining a voting majority from adolescents who many know only what they have been told in school by their teachers and professors and family. Again, this is a way to win elections through the wrong door.
I conclude by saying that all I have stated here reveals the desperation of the Democratic Party to regain the offices and power that it has been denied and to overcome the rejection of its policies by most American citizens. Finally, I state that if the Democrats wish to abolish the Electoral College (one reason for its establishment was to give the smaller states with few citizens equal weight), then perhaps the Democratic Party should consider endorsing the abolition of the Senate where the smaller states have as many senators as the larger states. The fact is that the Democratic Party is grasping at straws to win elections to the point of endorsing illegality.

A final thought: What this party should at some point come to understand is that their anger, frustration, and desperation comes from the reality that their policies and platform have lost the trust and confidence of the American people. Perhaps the best example of the absurdity of the attacks from the left on this President is the charge of anti-Semitism, when in fact his own daughter and son-in-law are Jewish, and he is a firm backer of the State of Israel, and he went so far as to move the embassy to Jerusalem in the face of great Arab opposition.